Both KKR and SRH have won two of their three games but the hosts are ahead with a better net run-rate.

Two of the top performers of Indian Premier League (IPL) 2017 collide in the first game of Saturday s double-header as Kolkata Knight Riders (KKR) take on Sunrisers Hyderabad (SRH) at the iconic Eden Gardens Stadium. While Mumbai Indians (MI) finished on top after defeating Royal Challengers Bangalore at the latter s home ground on Friday, Both KKR and SRH are ahead of the team in net run-rate and just a victory away to climb to the top of the points table. Both teams look equally strong with captains and big names in form and the Kolkata crowd can expect a great contest of cricket. LIVE CRICKET SCORECARD: Kolkata Knight Riders vs Sunrisers Hyderabad – Match 14

The biggest setback for KKR currently is the injury of their star opener Chris Lynn, whose innings kick-started KKR s journey in IPL 10. However, the team found an unexpected replacement in their spinner Sunil Narine, whose fast-paced innings took the burden off KKR s middle-order, handing them a comfortable victory. Captain Gautam Gambhir is in a supreme form and in-form Manish Pandey is another name the team can bank on for a stellar performance with the bat. The line-up further consists of Robin Uthappa and pinch-hitter Yusuf Pathan to ensure the knights get good runs on the board.

As far as bowling is concerned, KKR have had a few successful experiments with the likes of Ankit Rajpoot coming good. However, with frontline pacer Umesh Yadav back in action, KKR will have very little to worry about. Rajpoot may take place of Trent Boult, given the latter is yet to find his sync on Indian soil. KKR have multiple options in spinners. While Narine cemented his spot with all-round performance in the previous match, they may reconsider bringing Kuldeep Yadav back in place of Piyush Chawla. The team finds two quality all-rounders in form of Chris Woakes and Colin de Grandhomme and will be set for Saturday s battle.

David Warner s army is off to a fruitful journey in IPL 10 as well. The reigning champions have made their intentions clear with their performance so far that they are not ready to give up the title. The top-order consisting Shikhar Dhawan, Moises Henriques and Yuvraj Singh have performed consistently with captain Warner setting example for all of them. However, their middle-order batting has not been tested yet and will have to fire up once the top tumbles.

The most attractive bit though has to be SRH s bowling. Afghanistan leg-spinner Rashid Khan is the silver-lining of the squad who has surprised one and all with his consistency and surprising spells. The strong pace-attack is strengthened with the presence of Bhuvneshwar Kumar, Mustafizur Rahman and Ashish Nehra. Henriques, Deepak Hooda, Ben Cutting and Yuvraj are capable of bowling occasionally. However, Warner may consider bringing in Mohammad Nabi in place of Ben Cutting.

Story so far: Both KKR and SRH have won two of their three games but the hosts are ahead with a better net run-rate. 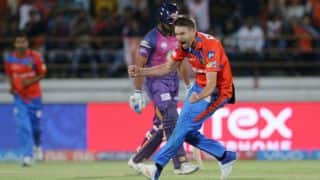 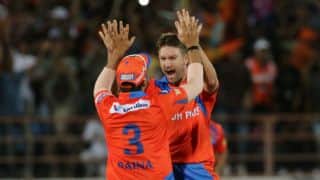