Kolkata Knight Riders dished out a clinical bowling performance to beat Mumbai Indians comprehensively by 32 runs and virtually seal a berth in the four-team play-offs of the Indian Premier League on Wednesday. 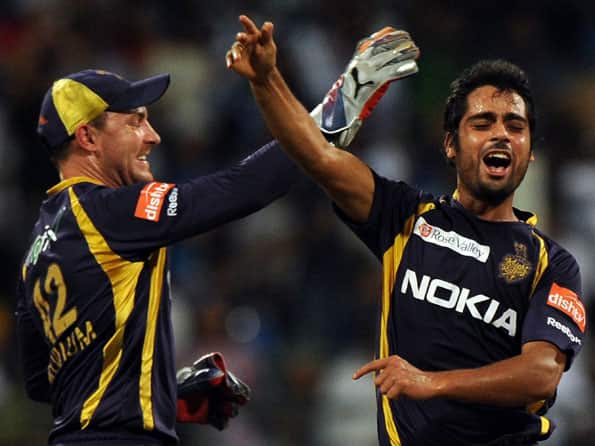 KKR players celebrate the fall of a Mumbai wicket AFP

Kolkata Knight Riders dished out a clinical bowling performance to beat Mumbai Indians comprehensively by 32 runs and virtually seal a berth in the four-team play-offs of the Indian Premier League on Wednesday. With is win KKR moved to second place in the IPL Points Table

Chasing a modest 141, MI lost wickets at regular intervals after being 60 for one to be shot out for 108 in 19.1 overs, their second lowest total of the season after the paltry 92 made against Delhi Daredevils at this venue.

West Indian off-spinner Sunil Narine was unplayable and pushed MI to the brink with a superb haul of four for 15.

Narine was well-supported by Laxmipathy Balaji (2 for 11) and Jacques Kallis (2 for 42), while left arm spinners Shakib Al Hasan and Iqbal Abdulla too did their bit with a wicket each.

MI batsmen made a hash of what appeared to be a gettable score at the Wankhede Stadium and again the dismissal of their icon Sachin Tendulkar for 27 in the 11th over triggered a sharp collapse, which saw the home team lose their last eight wickets for just 48 runs.

The MI batsmen struggled against the varied KKR attack on a wicket that possessed no devil like in the past but provided some appreciable bounce to the spinners.

The victory helped KKR to take the second spot behind table leaders Delhi Daredevils with 19 points, while MI remained third on 18 points ahead of their final game against Rajasthan Royals at Jaipur on May 20.

KKR will face Pune Warriors in their final league game at Pune on Saturday.

Apart from Tendulkar, who hit three fours and a six in 24 balls, Dinesh Kartik (21), Rohit Sharma (12) and Ambati Rayudu (11) got starts but failed to bring Mumbai to the finishing line.

Earlier, Rudra Pratap Singh bagged two wickets in as many balls in his first over as Mumbai Indians restricted Kolkata Knight Riders to a paltry 140 for 7.

Seeking a victory to seal a play-off berth, MI were on top from the time skipper Harbhajan Singh opted to field after winning the toss as their bowlers, led by R P Singh, kept the rival batsmen on a tight leash.

There was little of note in KKR’s innings, which never kept going after the loss of opener Brendon McCullum and Jacques Kallis in successive balls to R P Singh.

Skipper Gautam Gambhir made 27 off 23 balls with a six and three fours, while Manoj Tiwary scored an attractive 41 off 43 balls with two sixes and as many fours before both threw away their wickets.

The lower order batsmen tried their bit and managed to add 46 runs in the last five overs, with Yusuf Pathan making an unbeaten 21 in 21 balls with two fours, but the score looked below par on a track that looked good for batting.

For MI, who had lost their previous home game to Royal Challengers Bangalore by a big margin, R P Singh led the bowling honours with figures of two for 33 while Lasith Malinga, Munaf Patel, Kieron Pollard and Dwayne Smith all picked up a wicket apiece.

KKR were rocked on the back foot by R P Singh who packed off McCullum (1) and Kallis (0) off successive balls in his first over, and the innings’ second.

While McCullum got the wrong end of a dubious umpiring decision, Kallis had his off stump uprooted by a peach of a delivery from R P Singh.

R P Singh was denied a hat-trick by Manoj Tiwary, but the scoring rate fell down because of these two quick wickets.

Gambhir, who began with a superb straight drive off the first ball of the match from Munaf Patel, was a bit fortunate not to have been dismissed on nine as he was dropped by Sachin Tendulkar at third man fence off R P Singh.

MI struck another major blow soon after the end of the strategic time-out when Pollard packed off Gambhir with a ball that held its line and took the top of his off stump.

Gambhir’s stand of 38 in 42 balls for the third wicket with Tiwary helped the visitors steady their ship.

Tiwary was, however, lucky when umpire Billy Doctrove did not uphold a confident caught behind appeal by Dinesh Karthik off Pollard.

At the half-way stage of their allotted overs, the visitors had moved up to 54 for three.

The 12th over, third by Harbhajan Singh, proved fruitful for KKR when it yielded 14 runs with Tiwary cutting the off-spinner for a four and then lofting him for a six.

The Bengal batsman then stepped out to smack Malinga for a huge six over the sight screen in the next over.

At the other end, Shakib-al Hasan played a poor shot and got bowled trying to pull Dwayne Smith to an end the productive 29-ball 45-run fourth wicket partnership with Tiwary.

Tiwary too fell immediately afterwards, caught at long off by Malinga off Munaf’s last over as KKR slumped to 91 for five. The foolish run out of Debabrata Das in the next over made life more difficult for the visitors.

Pathan led a charmed life. He top-edged and got a four, was caught off a no-ball and added 29 runs in 16 balls for the seventh wicket with Rajat Bhatia (12) that improved the score.(PTI)