The West Indies have reached 84 for two in their first innings.

Darren Bravo was the next man to walk to the middle however, he also lost his wicket nicking behind. This time the bowler was Chris Jordan who also got some amount of movement early on. Brathwaite was then joined by Marlon Samuels and they’ve both been quite solid together but they’ll aim for a much bigger partnership. West Indies have scored 84 for two and another wicket at this time could be pickles for them.

Earlier, England lost the plot completely against West Indies in the morning session. After resuming the day on 341 for five, they lost wickets in a flurry to end up bowled out for 399. After the first session of Day One they would not have dreamt of reaching 400. At Stumps they would have thought that 500 was on the cards. At 365 for nine they would have expected the final wicket to fall soon, but to the credit of Chris Jordan and James Anderson, they managed to get within a whisker of 400.

All of the hard work done by Ian Bell, Joe Root, and Ben Stokes was completely undone by the remaining English batsmen once again in the first session on Day Two. Stokes, James Tredwell, Jos Buttler, and Stuart Broad all fell early in the day, and it was up to Anderson and Chris Jordan to add a few important runs for the final wicket that got England to within sight of 400 runs. Live Scorecard: England tour of West Indies 2015, 1st Test at Antigua Day Two

A superb ton from Bell and valuable half-centuries from by Root and Stokes helped England finish Day One at a thoroughly commanding 341 for five. Bell and Root sparked a remarkable turnaround after being reduced to 34 for three at one stage. West Indies’ pacers struck three times to leave England in tatters in a rain-affected first session in the first Test between England and West Indies at North Sound, Antigua. Jerome Taylor, Kemar Roach, and Jason Holder took a wicket apiece and each of the top three English batsmen are back in the hut.

Jonathan Trott, pushed up to open the innings, was out for a three-ball duck on Test comeback. Much was said and written about his recall to the national side, but he failed to make any positive impact, edging Jerome Taylor behind to Darren Bravo without scoring. Fellow opener and under-fire captain Alastiar Cook scored a slow and unattractive 11 off 28 balls, but it proved to be the fastest innings of the morning. 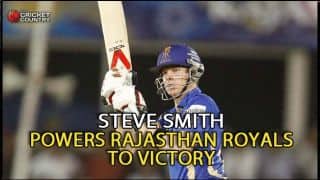 Percy Sledge: The man behind the term “sledging”