Kraigg Brathwaite's century put the hosts in the driver's seat on Day 1 of the first Test.

West Indies opener Kraigg Brathwaite said he is not yet satisfied with his unbeaten century against Bangladesh on the opening day of the first Test and is anxious to convert it into something even bigger.

The 21-year-old unfurled a patient unbeaten 123 on the opening day at Arnos Vale here on Friday as the West Indies, asked to bat first, finished on 264 for three, reported the Caribbean Media Corporation (CMC).

At the close of play, he was partnered by Shiv Chanderpaul on one, and said batting with the veteran the West Indies left-hander presented the ideal chance to build a big score on day two of the match Saturday.

“The hundred was a good feeling and I was quite happy but I want to continue and get a big score and put the team in a good position to win,” Brathwaite said.

“It is a good opportunity because he [Chanderpaul] has a lot of experience, so it is just about going out there and starting over, not thinking that you are on hundred but starting back at zero, and play positively.”

The right-hander’s knock was the rock upon which the Windies built their innings. He faced 269 balls and struck eight fours, and shared century stands with opening partner Chris Gayle (64) and Darren Bravo (62).

He was typically patient but was quick to pounce on anything loose, evident when he punched a full toss from off-spinner Mahmudullah to the cover boundary to reach his century.

“I’m obviously quite pleased. It’s the first time I’ve batted a full day in Test cricket. I worked hard, backed myself and got a big score,” he said.

“The pitch was quite good, the ball came on but as time went on the ball began to slow up a little more and it got a little difficult. Obviously batting with Chris it takes pressure off you and you just have to stay patient.”

The century was Brathwaite’s second in Tests, following on from his maiden 129 against New Zealand in the second Test in Trinidad in June.

He said he found the going much easier this time around.

“Early on I got boundaries a lot easier than in Trinidad. Obviously the two pacers (Tim Southee and Trent Boult) from New Zealand made things a little difficult but here was a lot easier. The pitch played well and the ball wasn’t swinging.” 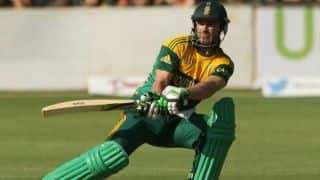