India's chief cricket selector Kris Srikkanth said it was for batting maestro Sachin Tendulkar to decide when he should end his international career. 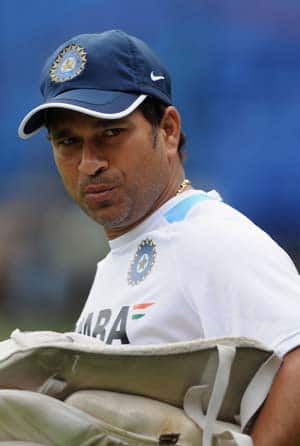 India’s chief cricket selector Kris Srikkanth said it was for batting maestro Sachin Tendulkar to decide when he should end his international career.

Calls for retirement of the senior players have strengthened after the team’s disastrous tour of England and Australia.

Rahul Dravid retired from international cricket earlier this month and there is speculation on when Tendulkar, who was surprisingly picked for the Asia Cup, will call it a day after finally achieving his 100th international century in Dhaka last week.

Srikkanth, while praising Tendulkar for the landmark century, said whether to retire or not should be the batting maestro’s personal decision.

“Let Sachin only decide about it,” said Srikkanth, who has come under flak for the team’s poor run since winning the World Cup last year.

Srikkanth, however, remained optimistic about the team’s future and said winning and losing are a part of the game.

“Cricket is a game where sometime we lose and sometime we win. But seeing it in the right spirit of sports, we should not forget that it is the same team which brought World Cup a year back. But yes, we did have a lull after that for about six to eight months,” the former India captain told reporters during the launch of the book “Hunger Games” and premiere of the movie “The Hunger Games” on Wednesday.

“Having played cricket, I know the game very well. We should always keep in mind that it’s a game which has lots of up and downs. I think cricket makes people feel hungry. The hunger for the game and hunger for the runs will always be there in the country,” said Srikkanth.

Srikkanth was also happy with the emergence of Delhi boy Virat Kohli, who was recently elevated as the vice-captain, as a match winner.

Asked about the prospects of Kohli as the future captain, Srikkanth said: “I really can’t say, but it’s good for the team. I’m sure there will be many more Kohlis in future.” (IANS)