Kuldeep said he had prepared hard for the selections and the disappointment had led him to say he wanted to end his life.

Kuldeep Yadav, one of the India team regulars, has struggled a lot to earn his current position. The chinaman bowler recently shared that there was a stage in his career when he had contemplated either to leave cricket or commit suicide after he was not picked in Uttar Pradesh’s squad. He said he had prepared hard for the selections and the disappointment had led him to say he wanted to end his life.

I had worked hard for my selection, but when I was not picked, I mentioned suicide in frustration. It happens to everyone in the heat of the moment, Kuldeep told Hindustan Times. I was a meritorious student in school and wanted to play cricket just for fun. I never thought of making it my vocation. In fact, my father wanted me to play cricket and took me to the coach, he added.

Kuldeep was primarily aiming to become a seamer but was identified as a spinner by his coach.

“I always wanted to become a seam bowler, but my coach forced me to become a spinner. When I bowled a few balls (Chinaman), I was asked to make it a habit. Otherwise, I didn t know I was bowling something different.

I keep watching videos of Warne. His grip of the ball, length of deliveries and use of the crease are unbeatable. I try to learn from the footage.

Kuldeep shone on his debut, bagging four crucial wickets in the deciding Test against Australia in the latest Border-Gavaskar Trophy.

It was a pressure game. It was the series decider. I was bowling alongside Ravichandran Ashwin and Ravindra Jadeja. I felt at ease only after bagging four crucial wickets. I felt the pressure as bowling in such conditions was quite difficult. But I focused on the length of my deliveries, he said about the match.

If I am sure about my skills, I will be successful. So, I keep concentrating and working hard on my abilities, he added.

PS4 is my favourite (video) game and it helps me understand and solve the problems of life. I don t stop thinking about the game even when I am home and enjoying my mother s home-cooked food, Kuldeep revealed about his life outside cricket. 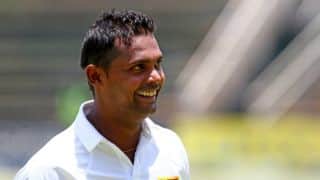