The only other left-arm spinners to take six wickets in an ODI are Murali Kartik and Sanath Jayasuriya.

On Thursday at Trent Bridge, Kuldeep Yadav marginally claimed the record for the best figures by a left-arm spinner in the history of ODIs, surpassing another Indian, Murali Kartik, with exceptional figures of 6 for 25 in 10 overs. The previous best ODI figures by a left-arm spinner was Kartik s 6 for 27, achieved against Australia in Mumbai in 2007. For over 14 years, Sri Lanka titan Sanath Jayasuriya had owned the record having claimed 6 for 29 at Moratuwa against England back in 1993. Kuldeep, Kartik and Jayasuriya remain the only left-arm spinners with six-wicket hauls in ODIs.

Kuldeep s stunning display was an extension of the grip he s maintained over England s batsmen following a career-best 5 for 24 in the first T20 International last week, and set up India s eight-wicket hammering of the No. 1 ODI team. So far on India s tour of the UK, the 23-year-old has taken 18 wickets in 24.3 overs.

After his match-winning performance at Trent Bridge on Thursday, Kuldeep expressed his desire to earn a call-up to India s Test squad. After the three-match ODI series, India and England will play five Tests in August-September. 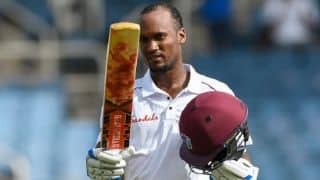