Harbhajan Singh has high hopes from young chinaman Kuldeep Yadav who he feels could become India's leading spinner in the coming future.

Harbhajan Singh has high hopes from young chinaman Kuldeep Yadav who he feels could become India’s leading spinner in the coming future.

Kuldeep has become a regular fixture in India’s limited-overs setup in the past one year and is steadily cementing his place in the Tests too. In the recently concluded two-Test series against the West Indies at home, Kuldeep was the second highest wicket-taker with 10 scalps against his name.

“Kuldeep has shown glimpses of what he can do on a first-day wicket,” Harbhajan was quoted as saying by IANS on Thursday. “He is slower in the air and gets the ball to turn both ways. Going forward, he should be India’s key and deciding factor. He will be the No.1 spinner in future.”

Harbhajan feels the conditions at Lord’s weren’t conducive for a spinner which made the life difficult for the 23-year-old who has 19 wickets from five Tests so far.

“In England, the conditions were seaming and the day he bowled, it was the coldest day in summer,” Harbhajan, who was in England during the tour for commentary duties, said. “So, for a wrist spinner, it is very difficult. He could not do the things he wanted. He has time and again proved his credentials and the team depends a lot on him and will in the future.”

Harbahajn, a veteran of 103 Tests, is worried about the slump of teams of the likes of West Indies, Sri Lanka and Zimbabwe in recent times. “The result (of India-West Indies Test series) shows that this was a one-sided affair. More than how well India played, the West Indies was not even competing. They have always produced some match winners, but at the moment I doubt whether they have any. This is worrying for cricket. Sri Lanka is going down, so is Zimbabwe. All these teams used to be so good,” the 38-year-old said. 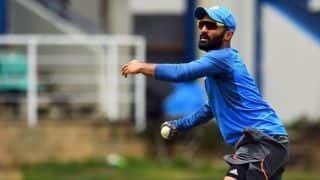