South Africa have lost all three matches of the six match ODI series.

South Africa have lost all three matches of the six match ODI series. Today’s loss was their heaviest defeat in terms of runs at Cape Town as they lost by 124 runs. Virat Kohli was the star batsman for India registering his 34th hundred to take India’s total to 302. The Spin duo Kuldeep Yadav and Yuzvendra Chahal shared eight wickets among them to bowl the host out for 179.

Aiden Markram and JP Duminy were looking good until the spinners came in to the play. Later, David Miller and Khaya Zondo showed some resistance but failed to score big.

They are world class spinners

“But we managed to claw our way back. They are world class spinners. Our batsmen are struggling to pick their spinners even after three games. They are landing the ball in the right areas more often than not,” he added.

AB de Villiers who hasn’t participated in the series due to injury is expected to make a comeback in the fourth match at New Wanderers Stadium, Johannesburg. Markram believes his return will be a massive inspiration.

“Credit to them. If ABD would be back, it might serve as a massive inspiration.” 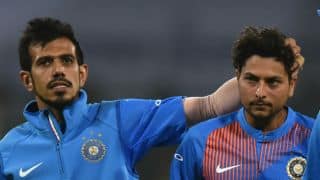