Azhar Mahmood added that Sangakkara is also a great ambassador for the sport.

Pakistan all-rounder Azhar Mahmood has heaped praise on veteran Sri Lankan batsman Kumar Sangakkara, saying that the latter is a great role model for all young aspiring cricketers.Mahmood said that Sangakkara has been a fantastic ambassador for not only Sri Lankan cricket, but the game of cricket all over the globe, PakPassion reported. He insisted that Sangakkara’s records and achievements were extraordinary and he’s a great role model for any young cricketer. The Pakistani all rounder further said that the Sri Lankan veteran has always been very strict in terms of maintaining his fitness, and even close to retirement, he has never been complacent on part of his training at the nets. READ: Kumar Sangakkara receives guard of honour from India

Sangakkara, who is currently featuring in the three-match Test series against India, will retire from international cricket after the ongoing second Test at the P.Sara Oval in Colombo. His farewell series however, has been an average one for the legendary batsman, having scored a total of 77 runs in the three innings in the series so far, with the highest being 40 in the second innings of the first Test. READ: Kumar Sangakkara — one of the very best ever

Sangakkara was given a guard of honour by the Indian team upon his arrival at the crease at the start of his innings in the second Test. The wicketkeeper batsman had retired from One-Day Internationals (ODI) alongside former Sri Lanka skipper and close friend Mahela Jayawardene during the recent ICC Cricket World Cup 2015, in which the Sri Lankans were knocked out by South Africa in the quarter-final. Sangakkara retires as the second and fifth-highest run-getters in ODIs (14,234) and Tests (12,350) respectively at the time of his retirement. #ThankYouSanga: Virat Kohli keeps cricket’s innocence alive Kumar Sangakkara’s 287 against South Africa and other great knocks 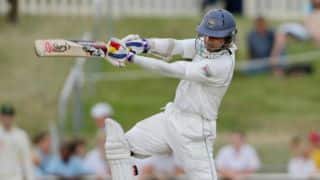