Sri Lanka‘s legendary wicketkeeper-batsman Kumar Sangakkara on Monday became the second Sri Lankan to score 19,000 runs in First-Class cricket. He used to play First-Class cricket for Central Province, Colombo District Cricket Association, Durham, Kandurata, Marylebone Cricket Club, Nondescripts Cricket Club and Warwickshire. He is behind Gehan Mendis, who is 2,425 runs ahead of him, as Mendis used to play for Lanchashire (1974-1985) and Sussex (1986-1993). Sangakkara is followed by Mahela Jayawardene, Thilan Samarawera, Laddie Outschoorn and many more. Kumar Sangakkara vents out frustration on DRS system during England vs Sri Lanka 2016, 3rd Test

Earlier, Kumar Sangakkara showed frustration after a failed review for Jonathan Bairstow’s wicket, but the DRS rule is set to change. This occurred when Bairstow survived by narrowest of margins at Lord’s overnight in 3rd Test between England and Sri Lanka. However, the rule is set to change soon as discussed by the ICC panel after discussions with their cricket committee. This is not the first time the DRS system has been questioned. It was done earlier as well during Australia vs New Zealand Test series. The incident occurred on Wednesday in the opening day of the Test. Under the new rules, Bairstow would have been given out and England would have been left 6-182. Kumar Sangakkara beats Sachin Tendulkar in GOAT final

Also, after much anticipation the final results of Greatest ODI Player of All Time (GOAT) are out and to much surprise the winner is Kumar Sangakkara. The final was hosted between Sangakkara and India’s legend cricketer Sachin Tendulkar. Looks like Sri Lankan fans have come out in all support to push Sangakkara to the title ahead of Tendulkar after an exhaustive online polling process.

Sangakkara’s prowess in ODI needs no mention. He has garnered 14,234 runs from 404 matches with an average of 41.98 with 25 centuries to his name. Apart from batting he was master behind the stumps as well. He has contributed to 482 dismissals behind the stumps. 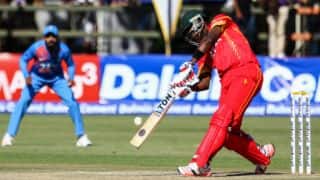