Kumar Sangakkara: Blessed to have the support I have had

Kumar Sangakkara: Blessed to have the support I have had

Sangakkara today said when one retires from international cricket it does not strike him till the last moment.

Colombo: Showered with mementos and good wishes in an elaborate farewell ceremony after the second Test match against India, an emotional Kumar Sangakkara today said when one retires from international cricket it does not strike him till the last moment. “It never hits you until the end comes. You finish the cricket and then you are out there talking about yourself in the past tense,” Sangakkara said after bidding farewell to the international cricket here today. “Preparation as usual was the same, the focus and putting the fact that it is my last Test behind me. The emotion used to come at the end of the day, knowing that the countdown had started,” he said. Kumar Sangakkara’s farewell celebrated by Amul

Talking about the guard of honour given to him by both the Sri Lankan as well as the Indian teams, Sangakkara said: “It [guard of honour] is just another reminder when you walk through that this is the end really. There’s no choice but to accept it and get on. I have been very blessed to have the support I have had all through the years and also the support I had over the last five days.”

Sangakkara, who signed off with 12,400 runs in 134 Tests at an average of 57.40, expressed disappointment over Sri Lanka failing to stop India from winning the Test and levelling the three-match series 1-1. “Unfortunately, we didn’t play as well as we could. India played a fantastic game of cricket. But from a personal point of view, enjoyed every minute of it even though ending up on the losing side is disappointing. I was very, very glad that I have been fortunate enough to play another Test match,” 37-year-old left-hander. Michael Clarke congratulates Kumar Sangakkara on fine cricket career

Sangakkara ended his career in front of his family – parents, wife and children — as well as close friends and supporters and said it was a special moment. “There were quite a few special moments. Today was always going to be special for a lot of reasons. It was the first time that I had my parents, siblings, wife and children all together at one place, watching me play. That is always going to be the memorable part of my game. Not the on-field part.

“But being not able to spend time with my wife, children and parents. My parents have never made a fuss of anything. They rarely come to the games or see me off during the games. But they keenly follow my game,” he revealed. The country’s president and prime minister were also present in the stadium today with the former offering him a bureaucratic role for Sri Lanka in the UK as their High Commissioner there. Kumar Sangakkara’s farewell speech: A transcript

“I respect the President’s request. I need to talk more with him about it. I’m very inexperienced in such things. You need to have special knowledge for that post. I have to think about it and work out a reply to the offer,” he said. The hosts surrendered meekly to India, chasing a target of 413 of the fifth and final day here. Now there are hardly any big names left in the Sri Lankan cricket line-up, but the retiring legend did not seem to be too bothered.

“There’s no danger at all. The younger generation takes their cricket very seriously. They take their commitment very seriously and I know when you are in the dressing room, when you lose, you see the disappointment and the hurt. And without a doubt, that will drive them to do much better. It will take some time for them to find their feet, it is a very young team but the way they are going about their preparation, their work ethic, their commitment, no one can fault them for that. The harder they work, the better they will become and I am sure you will see them take Sri Lanka cricket higher in future,” said the legendary batsman. Kumar Sangakkara welcome to ‘Former Cricketers’ Club’ by Sunil Gavaskar

Sangakkara did not have an ideal end to his career as he scored only 95 runs in the last four innings, dismissed by R Ashwin on all occasions. “You can’t always score runs, and that’s always going to be the case in your career. And everyone wants to sign off on a high but unfortunately I couldn’t score a fifty or a hundred or do it in that sense. The focus is always very clear when I go out to bat. It is about scoring runs and trying to take the team forward. Unfortunately, my contribution wasn’t enough in this game,” he said.

Sangakkara said he now planned to go home and sleep before figuring out what to do in future. “I’ll go home and sleep, then tomorrow I’m going to England. If you’re talking about my future, I have to sit down with my wife and children and figure out what’s best for them. Whether I’m part of cricket or not, the sport will go forward. It won’t stop. I have a great responsibility to my family, so I’ll think about them first, before anything else,” Sangakkara signed off. Kumar Sangakkara thanks fans for being an inspiration to him 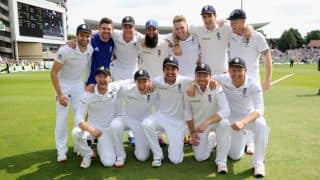 Kumar Sangakkara: Zaheer Khan, Graeme Swann challenged me the most