Kumar Sangakkara breaks record for most dismissals in ODIs

Kumar Sangakkara breaks record for most dismissals in ODIs

Kumar Sangakkara added another feather to his cap during the third One-Day International (ODI) between Sri Lanka and England at Hambantota on Wednesday, becoming the cricketer with the highest dismissals in the ODI format by surpassing former Australian wicket-keeper batsman Adam Gilchrist‘s record of 472 dismissals. Sangakkara had earlier completed 13,000 ODI runs during his innings of 63 from 62 balls during the game.

Sangakkara broke the record when he caught Alastair Cook off the bowling of Dhammika Prasad, making it the 473rd dismissal of his career. Following is the list of most dismissals in ODIs:

England were chasing a Duckworth-Lewis adjusted target of 236 from 35 overs after Sri Lanka finished on a score of 242 for the loss of eight wickets from as many overs, which was curtailed due to a prolonged spell of rain that lost a lot of time for both sides. Lahiru Thirimanne and Rangana Herath were batting on scores of 62 and two respectively, while Chris Woakes emerged the pick among the English bowlers with figures of three for 41 after seven overs. Kumar Sangakkara had earlier scored his 89th ODI half-century, completing 13,000 runs career runs in the process. England were set a 236-run target, which was been revised according to Duckworth-Lewis rules. 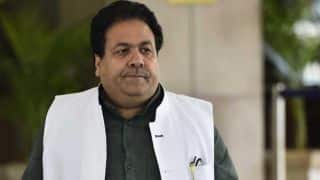