Hardik Pandya has hit a purple patch, ever since he has donned the Indian colors. His run started in ICC Champions Trophy in England, and has continued in the series against Sri Lanka and now against Australia. His show has gained him praise from one of the finest to grace the game, Kumar Sangakkara.

Pandya, who smacked a 72-ball 78 in the third One-Day International (ODI) in the ongoing India-Australia series was commended for his show by former Sri Lankan great. Sangakarra s tweet read, seemed to canter to the series win. @hardikpandya7 is a very special player. India looks a complete side for all conditions.

Pandya as humble as he is replied Sangakkara with a courtesy reply.

Thank you for the kind words sir!

Pandya has so far accumulated 181 runs at 60.33 in the 3 ODIs played so far in the India-Australia series, apart from picking 5 wickets at 28.90. It was in July that Pandya debuted for India in Tests in Sri Lanka. He scored his maiden Test ton playing only his second match. In the preceding ODI series versus Sri Lanka, Pandya shone with the bat making 178 runs at 59.33 including a 108. 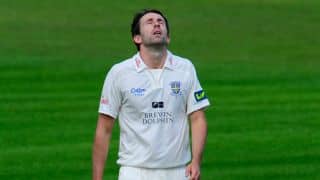