SL reached a score of 127 for four at the end of 22 overs, with Thirimanne at the other end.

Sri Lankan batsman Kumar Sangakkara brought up his 89th One-Day International (ODI) half-century off 53 deliveries during the third ODI against England at Hambantota. The hosts reached a total of 127 for four at the end of 22 overs at the time of Sangakkara completing his milestone. The veteran batsman had earlier completed 13,000 ODI runs when he reached a score of 13 from 17 balls.

Sri Lanka earlier won the toss and chose to bat, with their batting lineup firing consistently in the series so far. The hosts were playing without the presence of Mahela Jayawardene, whose request to not play the third ODI due to personal reasons was granted by Sri Lanka Cricket (SLC) as well as the team manager. Sri Lanka currently lead the series 2-0, and will look to consolidate their stronghold in the ongoing series with a victory in the third game as well. 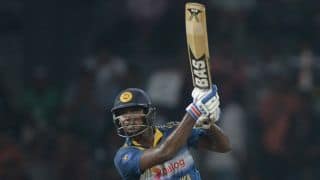 Sydney man behind #PutOutYourBats tribute finally speaks about his tweet