Sangakkara completed his half-century off 81 balls.

Kumar Sangakkara completed his half-century off 81 balls. This was his 91st One-Day International (ODI) fifty.

Sangakkara and Mathews continued to steer the Sri Lankan innings as Sri Lanka reached a total of 130 for three after 30 overs. Mathews and Sangakkara also completed their 50-run partnership. England deployed Moeen Ali and James Tredwell to bowl and they got plenty of turn from the Pallekele wicket but both the batsmen played carefully.

Earlier, England won the toss and put Sri Lanka to bat first. England got the success early on as they got the wicket of Kusal Perera only in the first over. Tillakaratne Dilshan who was playing well was dismissed next as he inside edged a length from Chris Jordan onto the stumps. Finn also got the big wicket of Mahela Jaywardena as he he edged to the second slip. 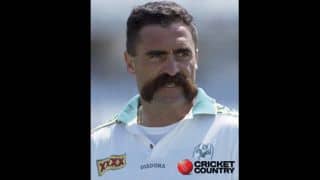