Ishant Sharma provided India a huge breakthrough when he got rid of Kumar Sangakkara.

Ishant Sharma provided India a huge breakthrough when he got rid of Sri Lanka mainstay Kumar Sangakkara in the 14th over of their chase in the first One-Day International (ODI) at Cuttack on Sunday. This was after Sri Lanka went past the 50-run mark as they look to pick up after a sluggish start against India.

Sri Lanka reached 61 for two after 13.2 overs, with Upul Tharanga at the crease but with two of their main batsmen, Sangakkara and Tillakaratne Dilshan back in the hut.

India made the first breakthrough when Tillakaratne Dilshan was caught by Wriddhiman Saha off Umesh Yadav. Chasing 364 to win, Sri Lanka were 31 for one in 8.5 overs. 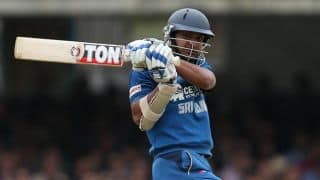