Sangakkara tried to drive Ashwin only to get a bottom edge to KL Rahul at silly point.

Kumar Sangakkara could only manage five runs off 12 balls before being snapped up by Ravichandran Ashwin on Day One of the first Test between India and Sri Lanka at Galle on Wednesday. Sangakkara came in to bat at No. 4 after Sri Lanka lost two wickets within three balls, but he was unable to survive for long. Sangakkara tried to drive Ashwin only to get a bottom edge to KL Rahul at silly point. Varun Aaron struck within two balls of Sri Lanka’s first wicket. Aaron had Kaushal Silva caught at slip by Shikhar Dhawan, but he was unlucky to be adjudged out after the ball missed his bat and took the shoulder instead. However, this was after Dhawan himself had dropped a straightforward catch at slip off the bowling of Aaron, with Silva being the lucky batsman. So in the end Silva survived but not for long. Live Updates: India vs Sri Lanka, 1st Test at Galle, Day 1

Earlier, Ishant Sharma struck early when he got Dimuth Karunaratne to get a leading edge to Ajinkya Rahane at gully. Sri Lanka lost their first two wickets with 15 runs of the board, as Lahiru Thirimanne and not Kumar Sangakkara came in at No. 3, but Sangakkara came in just three balls later. Earlier, Sri Lankan skipper Angelo Mathews won the toss and elected to bat first against India. Sri Lanka went in with a similar side that took on Pakistan in the Test series, with Jehan Mubarak retaining his place, and Rangana Herath making a comeback. Meanwhile for India, the injured Murali Vijay was replaced by KL Rahul, while all three spinners — Ravichandran Ashwin, Harbhajan Singh, and Amit Mishra — got to play with Varun Aaron and Ishant Sharma being the two pacers. Live Scorecard: India vs Sri Lanka 2015, 1st Test at Galle, Day 1 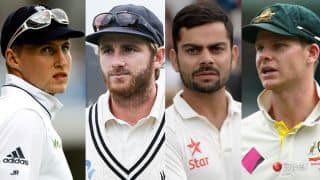