Sri Lanka lost their fifth wicket for 150 runs in the 26th over.

Sri Lanka lost their fifth wicket for 150 runs during the 26th over in the third One-Day International (ODI) against England at Hambantota, with Kumar Sangakkara being the batsman dismissed on a score of 63 from 62 balls, scoring seven boundaries during his innings. Sangakkara tried to play a delivery by Chris Jordan towards the leg side, but ended up mistiming the shot and giving Moeen Ali an easy catch at mid-on.

Sri Lanka earlier won the toss and chose to bat, with their batting lineup firing consistently in the series so far. The game faced a brief interruption after the second over of the Sri Lankan innings due to a brief spell of rain. The hosts were playing without the presence of Mahela Jayawardene, whose request to not play the third ODI due to personal reasons was granted by Sri Lanka Cricket (SLC) as well as the team manager. Sri Lanka currently lead the series 2-0, and will look to consolidate their stronghold in the ongoing series with a victory in the third game as well. 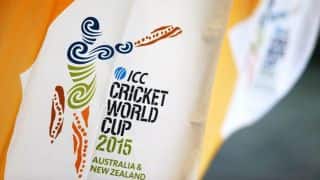