India were earlier bowled out for 393.

Dimuth Karunaratne dismissed for a five-ball one after he was trapped in front by Umesh Yadav on Day Two of the second Test at Colombo. This dismissal got Kumar Sangakkara to the crease in his final international appearance for his country. India were earlier bowled out for 393 in their first innings and Sri Lanka have gotten off to worst possible start to the innings. India now have the upper hand now and will look to make further inroads now. India were 319 for 6 at stumps on the first day before adding 74 more runs losing the rest of the four wickets. India will be happy with their effort on this deck which has assisted the pace bowlers and also given some purchase to the spinners. Wriddhiman Saha‘s charmed innings was the prime reason India got past 350 and his 56 got India towards 400. READ: India bowled out for 393 against Sri Lanka in 2nd Test at Colombo

Farewell, Sangakkara! And Thanks! https://t.co/S8E7wq99bU

India’s innings did not get the best of starts with Dhammika Prasad striking twice in his first spell. Coming back from an injury, Murali Vijay was trapped in front of the stumps for a duck. With an early wicket falling, India sent in Ajinkya Rahane at No. 3, the move back fired as Rahane played a poor drive and India were soon reduced to 12 for 2. READ: Kumar Sangakkara gets frustrated when denied singles: Yasir Shah

Indian captain Virat Kohli came out all guns blazing and looked positive to take the attack to the Sri Lankan bowlers. He got able support from the Indian opener, KL Rahul. Both of them scored their fifties adding 164 runs for the third wicket before a brilliant anticipation from Angelo Mathews at first slip of the bowling of Rangana Herath saw Kohli departing for 78. Rahul though continued on his merry way when he scored his second Test ton. 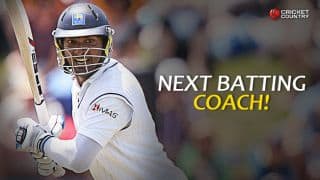