Kumar Sangakkara hit an unbeaten 61 in his 100th Test as Sri Lanka responded bravely to Australia's 316 in the third and final game of the series in Colombo on Saturday. 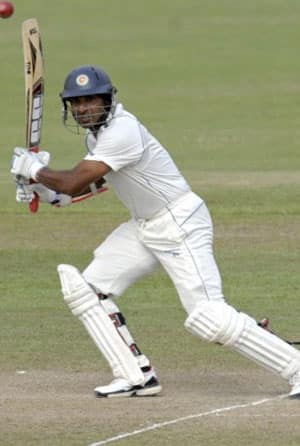 Kumar Sangakkara hit an unbeaten 61 in his 100th Test as Sri Lanka responded bravely to Australia’s 316 in the third and final game of the series in Colombo on Saturday.

Sri Lanka, seeking a series-levelling win, closed the second day at 166-2 in their first innings after a batting masterclass from Michael Hussey had steered the tourists out of trouble at the Sinhalese Sports Club.

Mahela Jayawardene chipped in with 31 not out in a third-wicket stand of 69 with Sangakkara to leave the hosts 150 runs behind with eight wickets in hand.

Hussey followed a match-winning 95 in the first Test in Galle and 142 in the drawn second game at Pallekele with a fluent 118 studded with 12 boundaries and two sixes.

The left-hander, a veteran of 62 Tests, passed 5,000 Test runs on the way to his 15th century — the fourth against Sri Lanka.

The 36-year-old’s value to the team can be gauged by the fact that he has scored four of Australia’s last six Test centuries, the other two coming from the blades of Brad Haddin and Shaun Marsh.

The hosts began their reply slowly as the left-handed opening pair of Tharanga Paranavitana and Lahiru Thirimanne took 25 overs to put 56 on the board.

Thirimanne, a 22-year-old playing only his second Test, scored a watchful 28 off 80 balls when he was bowled by seamer Peter Siddle just before tea.

Paranavitana made 46 when he fell to a sharp catch at short cover by Ricky Ponting off Mitchell Johnson to leave Sri Lanka 97-2.

But Sangakkara and Jayawardene, whose partnership of 624 against South Africa at the same venue in 2006 is a world record for any wicket, settled in to build Sri Lanka’s reply.

Hussey admitted it was important to dismiss the duo early if Australia wanted to win the Test.

“It is probably the biggest day of the series coming up tomorrow,” he said.

“If we can bowl really well, restrict them and take the wickets, that will put us in a fantastic position.

“But if we can’t get rid of Kumar and Mahela early, they are going to give themselves every chance to win the Test match as well.

“They are two class players and we have to work hard to dislodge them. It is going to be hard with the older ball. Hopefully we can make some inroads with the second new ball.”

Hussey himself was last man out for Australia, bowled by debutant seamer Shaminda Eranga, who finished with four for 65 after taking a wicket with his first delivery in Test cricket on Friday.

Haddin put on 75 for the sixth wicket with Hussey when Australia resumed the day at 235-5 before he was the first batsman to be removed in the morning session, caught behind off Eranga.

Hussey reached the 5,000-run mark with two consecutive boundaries off Welegedara that took his score to 99.

Hussey then watched from the other end as Johnson and Siddle were dismissed off successive balls by Welegedera, but Trent Copeland denied the seamer a hat-trick.

Hussey reached his century with a flick off Rangana Herath for a single and then scored 18 in a last-wicket stand of 21 with Nathan Lyon to boost the total.

Australia had been reduced to 22-2 in the ninth over on Friday after being sent in to bat by Sri Lanka skipper Tillakaratne Dilshan.(AFP)