Kumar Sangakkara scored 40 in his final innings at Galle.

Kumar Sangakkara, who got a send off from Galle at the end of the match full full of praise for his teammates. There were some special praise for Dinesh Chandimal, who scored an unbeaten 162 in the second innings to get Sri Lanka into the match. Of Course, he also mentioned Rangana Herath and Tharindu Kaushal, who between them bowled India out on the fourth day of the first Test at Galle. Sri Lanka won by 63 runs as India failed to chase down a target of 175 and were bowled out for 112. Ajinkya Rahane was the sole player, who offered some resistance but it was not enough to take India over the line. READ: Kumar Sangakkara bids farewell to Galle after memorable win for Sri Lanka

Amazing send off. So proud of the young team. @chandi_17 one of the best counter punching knocks I have seen. Rangana an Kaushi were amazing

The Sri Lankan supporters and players present at the Galle International Stadium gave a fitting farewell to  Sangakkara playing his penultimate Test match at the very venue he made his debut 15 years ago. It could not have been a better last match in Galle for their favourite son as the home team scripted one of their finest turnarounds with a 63-run win. While it was a quiet Test match by Sangakkara’s standards — he scored 5 and 40 in the two innings — one could find him delirious with joy when Kaushal dismissed Amit Mishra to complete a famous Test win. READ: Rangana Herath spins out India with 7/48 as Sri Lanka win 1st Test at Galle by 63 runs

Sangakkara will play his final match at Colombo, which begins from August 20. The VIP box had the Sangakkara family, all in attendance. Wife Yehali and the two kids — a son and a daughter —watched as the Sri Lankan legend walked out of his favourite ground one last time. READ: Kumar Sangakkara’s final battle at Galle 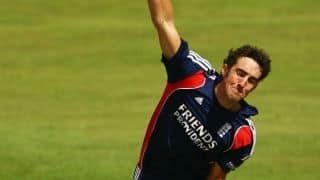