Kumar Sangakkara had announced his retirement from international cricket prior to the ongoing Test series in Lanka.

Sri Lanka wicketkeeping-batsman, Kumar Sangakkara had announced his retirement from international cricket prior to the ongoing Test series in Lanka, by saying that the current series would be his last international appearance. The Day 4 of the second Test between India and Sri Lanka turned out to be his last innings after being dismissed by Ravichandran Ashwin for mere 18. Following his dismissal, he left the field followed by a warm applause from the Indian team and the crowd as well. Prior to his dismissal, he was greeted by a guard of honour in both the innings by the Indian team and from Sri Lankan team prior to the match and when he came out to field.

He is the Sri Lankan batsman who is unquestionably world class, be it his majestic numbers or his exquisite cover-drives. He was also a wicketkeeper for a fair period, good enough to handle the vagaries dished out on Sri Lankan snake pits by Muttiah Muralitharan. Finally, he is perhaps the only leading cricketer to profess a fancy for Oscar Wilde. In several dimensions, each of them prominent and some exclusive, Sangakkara is special.

Folllowing his dismissal in the final innings, the social media was flooded with wishes and reaxtions on his illustrious career and thanked him for entertaining them throughout for all these years. #ThankYouSanga was trending all over Twitter. Following are few of the reactions:

Guess the time comes for everyone but #Sangakkara can be proud because he enriched our game. #SLvsInd

The end of one of the greatest careers of all time. Thank You @KumarSanga2 for enrichening our game. Extraordinary numbers. Bigger legacy.

The gentlemen’s game will be robbed of its two shining lights in the recent times. #ThankYouSanga #ThankYouClarke pic.twitter.com/P80AHk30Fw

.@KumarSanga2 is dismissed for 18 in his final Test innings. An end to an incredible career #ThankYouSanga #Legend pic.twitter.com/YGmWV9auSG

His batting was too priceless to squander for the extra value he brought in as a stumper — hence he had to give up the role in Tests. Indeed, as a specialist batsman he averages close to 70. The Ashes 2015: Early lunch taken at The Oval after rain stops play 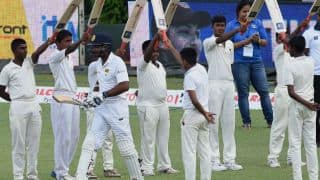