Jonny Bairstow was reviewed for lbw when he was playing at 56 against Sri Lanka in Day 1 of 3rd Test at Lord's on Thursday.

Kumar Sangakkara showed frustration after a failed review for Jonathan Bairstow’s wicket, but the DRS rule is set to change. This occurred when Bairstow survived by narrowest of margins at Lord’s overnight in 3rd Test between England and Sri Lanka. However, the rule is set to change soon as discussed by the ICC panel after discussions with their cricket committee. This is not the first time the DRS system has been questioned. It was done earlier as well during Australia vs New Zealand Test series. The incident occurred on Wednesday in the opening day of the Test. Under the new rules, Bairstow would have been given out and England would have been left 6-182. FULL CRICKET SCORECARD: England vs Sri Lanka, 2nd Test at Chester-le-street

Bairstow went to stumps even with unbeaten knock of 107, had he not been dropped at 11. This lead to further frustration from Sri Lankan members. Sangakkara vented it out through social media as well with his trail of tweets. Sri Lanka also lost one of their two reviews as a result of the unsuccessful challenge. However, as per the new rule, the benefit of the doubt given to the batsman in the ICC’s Decision Review System could soon be reduced by half. As per the current rule, 50% of the ball has to hit the stumps for a batsman to be given lbw and overturn a not-out verdict by the on-field umpire. Sri Lanka team mate, Mahela Jayawardene also came out in support Sangakkara and mentioned the changes will be implemented soon once the governing body approves of the same.

High time the ICC got rid of this umpires call. If the ball is hitting the stumps it should be out on review regardless of umps decision.

With The Umpire’s call technology is used as an excuse for the umpire making a mistake. Technology should ensure the correct decision’s made

If the umpire wants a comfort zone give him a margin of 20%. If anything more of the ball is hitting it his decision can be overturned.

The result of a review should not be ambiguous. We can’t say it’s hitting the stumps but we give the benefit of the doubt to the umpire

Under the new rules, only 25 per cent of the ball would need to be hitting the stump for a decision to be overturned. Jayawardene who now sits for the ICC committee spoke to ESPNcricinfo.com and said, “We’ve decided that the 50 per cent rule should be reduced to 25 per cent.  The MCC rule book says if it hits the wicket any part, it should be given out. So you’re going away from all that with the DRS 50 per cent rule.” As per research conducted, if the 25% rule is implemented 80% percent of the batsmen will be given out on review. As per the current situation, Sri Lanka lost one of their two challenges due to the review system.

Jayawardene further added, “If you take 25 per cent out, the stat says that 75 to 80 per cent of the decisions that were called umpire calls in the past will be taken out and be given out. You think benefit of the doubt when sometimes umpires are considering those margins that 25 per cent is okay, but I think 50 per cent is too much.” The recommendations will be discussed in the ICC committee at Edinburgh this month and if approved, will be implemented in Test and ODIs end of September. 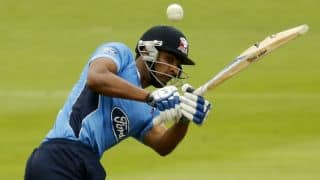