Kumar Sangakkara slammed his 10th double century in Test cricket during the first match against Pakistan at Galle. The double ton at Galle means Sangakkara moves close to Sir Donald Bradman, who scored as many as 12 in his career. Sangakkara faced as many as 425 balls during his marathon innings, cracked 24 boundaries and scored 221 runs to Sri Lanka ahead of Pakistan in the match which seems to be heading for a draw.

Sangakkara is in tremendous form of late as he is the top run-scorer in Test cricket in the year 2014. In 10 Test matches (including the ongoing match), the left-handed batsman has garnered as many as 1,384 runs. Sangakkara has smashed four centuries and eight half-centuries in this period, including a duck. His batting average since January 2014 is 86.50. Sangakkara also registered his highest Test cricket – 319 against Bangladesh.

Among those who are active in international cricket, it is only Sangakkara and Mahela Jayawardene in the top 10 list of batsmen who have scored most double centuries in Test cricket. Jayawardene is all set to retire after the ongoing Test series against Pakistan. In the list there is also Marvan Atapattu with six double centuries. Atapattu is currently Sri Lanka’s batting coach.

Sri Lanka took a lead of 82 runs as they declared their first innings at 533 for nine on the fourth day of the first Test.

Here’s the list of batsmen with most number of double centuries: 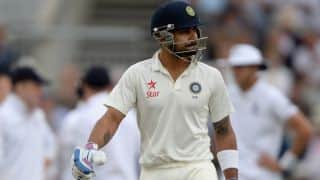