Earlier Sangakkara had to come out to the crease for the final innings.

Kumar Sangakkara‘s final innings in international cricket ended with a score of only 18 as Ravichandran Ashwin got him out for the fourth time in this series. He was out caught in the second slip by Murali Vijay. Virat Kohli went to Sangakkara and shook his hands. The entire Indian team followed him. On the stands, fans were still in shock. Wife Yehali, was disappointed initially but she recovered clapped and somehow managed a smile. Percy, the official fan of Sri Lanka was there in the ground and raised his bat one final time to acknowledge the crowd. Few kids gave him guard of honour and he entered the dressing room. Live cricket score India vs Sri Lanka 2015, 2nd Test at Colombo, Day 4

Earlier he had to come out to the crease for the final innings of his career quite early as Ashwin removed Sri Lankan opener Kaushal Silva in the third over of their second innings. Earlier, India declared their second innings at 325 for 8 after tea on the fourth day of the second Test in Colombo on Sunday, setting Sri Lanka a target of 413 runs. Ajinkya Rahane top-scored with 126 and Murali Vijay made 82. Off-spinner Tharindu Kaushal and seamer Dhammika Prasad claimed four wickets each. Sri Lanka lead the three-match series, having won the first Test in Galle by 63 runs. For Sri Lanka, Tharindu Kaushal and Dhammika Prasad both took four wickets each.

This is an emotional game for the Sri Lankan fans and cricketers as one of their legends is playing their last game. The opponents, India, gave his a warm reception when he came out to bat in both innings of his last Test. He  joined Dimuth Karunaratne in the crease. Sri Lanka are fighting for survival in this Test and Sangakkara’s final innings is going to crucial for his team’s fortune, not only in this Test but in this series as well. The pitch is taking turn and Sangakkara’s presence is very vital. Live cricket updates India vs Sri Lanka 2015, 2nd Test at Colombo, Day 4 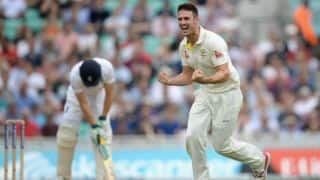