Former cricketer Mahela Jayawardena is enjoying the second Test between India and Sri Lanka that happens to be his first ever live Test match as a spectator as he tweeted from the P Sara Oval stadium at Colombo saying, “Was great to watch a test match live for the first time, India in front so far for the day. Few more wickets be great for SL.” With a fall of five wickets, the visitors have 315 runs on board in 84 runs after skipper Virat Kohli won the toss and chose to bat first. READ: LIVE BLOG: India vs Sri Lanka, 2nd Test at Colombo, Day 1

Was great to watch a test match live for the first time India in front so far for the day. Few more wickets be great for SL.

As this Test marks the legend Kumar Sangakkara’s final international game for Sri Lanka, the hosts will give their best to finish on the winning side at the end of the match. The tributes for the cricketer had begun well before with likes of Sachin Tendulkar, Anil Kumble, Rahul Dravid and many other praising the retiring cricketer.

“Sanga is someone very special. Over the last few years, he has taken batting to the next level. I don’t think he has anyone behind him in terms of international cricket, the way he has been batting. Over the last two years, he has scored runs all over the world. For a wicketkeeper to do that, it is never easy. That goes to show his fitness levels, his concentration levels and also his passion for the game. It is not easy for a wicketkeeper standing behind the stumps and coming back to bat at the top of the order and holding the innings together, sometimes winning single-handedly. It is not easy. Hats off to him,” Kumble said. READ: Anil Kumble congratulates KL Rahul on 2nd Test century during India vs Sri Lanka 2015, 2nd Test

Tendulkar who is considered to be one of the greatest cricketers admitted that he hated to watch when Sangakkara got going with the bat. “It was great to play against him. Whenever we played against Sri Lanka, he was the danger man we looked to get out. I thought him to be a dangerous batsman because he had a special ability: Even though he looked uncomfortable in the middle, he had this knack for scoring runs,” he added. 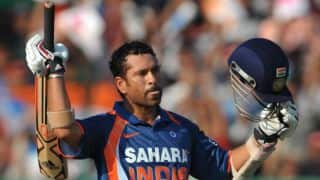