Australian legend Gilchrist has taken more catches, but has far less stumpings to his name.

Kumar Sangakkara added yet another feather to his already impressive cap when he went past Adam Gilchrist‘s wicketkeeping record to become the most successful wicketkeeper in One-Day Internationals (ODIs). Sangakkara already had the most dismissals in ODIs, but some of those came as a non-wicketkeeper. Sangakkara currently has 473 dismissals as a wicketkeeper — 377 catches and 96 stumpings.

Australian legend Gilchrist has taken more catches, but has far less stumpings to his name. South Africa’s Mark Boucher too has more catches than Sangakkara, but again has far fewer stumpings. In fact, fellow Asian ‘keepers, Indian MS Dhoni and Pakistani Moin Khan, are closer to Sangakkara’s stumping count than Gilchrist or Boucher.

Sri Lanka won the final ODI against New Zealand after Sangakkara’s century guided them to a winning total. The Kiwis were without some of their main players like Kane Williamson, Brendon McCullum, and Trent Boult, though New Zealand still managed to win the series. 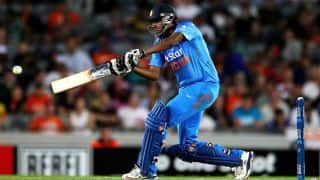