Sri Lanka needed less than 25 runs to the target with Mathews going strong.

Angelo Mathews came and true to his nature of batting, went after the opposition’s bowling attack and played a magnificent pull shot that reached the square leg boundary. Kumar Sangakkara was still playing his part and was rotating the strike with ease and finesse. The 14th over by Junaid Khan was expensive and there were a couple of pulls from Sanga that reached the fence. Sanga tried to clear the ropes and was caught at long on by Khurram Manzoor.

When there is Pakistan, Kumar Sangakkara can’t be far away from putting their attack to the sword. Sri Lanka were marching along in style and with his unique blend of nonchalance and calculated slogging, Sangakkara was finding the gaps with ease and boundaries were coming thick and fast for Sri Lanka before Junaid Khan produced a gem to dismiss Mahela Jayawardene in his penultimate Test and walked away from Galle amidst a rapturous send-off by the capacity crowd.

Mahela Jayawardene and Upul Tharanga were in control of the 99-run chase as Sri Lanka were on course to chase down the target against Pakistan in the final hour of the day’s play. Saeed Ajmal and Junaid Khan were pitching the ball in the right areas and making things difficult for the openers after the early flow of runs in the first three overs. Sri Lanka need to go at atleast five runs an over as only 15 overs are left in the day’s play. 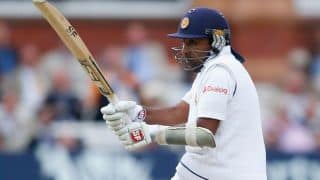 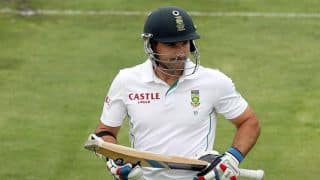