Kusal Perera and Dinesh Chandimal played contrasting innings, but each one proved vital for Sri Lanka.

Kusal Perera threatened to finish the match extremely early, but his dismissal sparked a massive collapse though Sri Lanka managed to keep a spirited Pakistan at bay to win the second One-Day International (ODI) at Pallekele on Wednesday by two wickets. Rahat Ali went for 34 in his first two overs, but he came back brilliantly to take three wickets. The way Perera batted at the start of the innings, it looked like Sri Lanka would canter to a win. The left-handed opener — who has been compared repeatedly with Sanath Jayasuriya — finally made good on his promise when he thrashed 13 fours and two sixes in an extravagant 25-ball 68. On the way he matched Jayasuriya’s record for the joint second-highest ODI half-century, off 17 balls. Blog: Sri Lanka vs Pakistan 2015, 2nd ODI at Pallekele

However, once Perera pulling Mohammad Irfan to Yasir Shah, Sri Lanka lost their momentum at an alarming rate. Perera and Tillakaratne Dilshan put on 92 in less than nine overs, but they added only another 48 in the next nine, at which point Upul Tharanga was was bowled by Rahat for 28 off 36. Sri Lanka then unravelled quickly; from 140 for 1 they crashed to 159 for 5 and then 196 for 6. Rahat started the slide when he had Dilshan bowled for 47. Angelo Mathews was then run out for 8,  and Lahiru Thirimanne proceeded to cut Rahat to Anwar Ali for 4. Scorecard: Sri Lanka vs Pakistan 2015, 2nd ODI

Dinesh Chandimal and Milinda Siriwardana then restored some sanity to proceedings, adding 37 in good time. Mohammad Hafeez soon ended the stand when he had Siriwardana out LBW for a well-made 26 off 28 balls. That brought in debutant Sachith Pathirana, who proceeded to play a defining innings. Chandimal dropped anchor, and Pathirana went for his shots. He hit four fours and a six in his 28-ball 33 in a partnership of 52 with Chandimal. He was stumped off Hafeez, but by then he had done the damage. Chandimal ensured that Sri Lanka went over the line by two wickets in the end. READ: Mohammad Hafeez’s performance against Sri Lanka shows why Pakistan need him in ODIs

Earlier, Azhar Ali top-scored with a 104-ball 79 to boost Pakistan to a score of 287 for 8 against Sri Lanka. Shoiab Malik (51) and Mohammad Rizwan (52) played fine innings as well though Sri Lanka kept taking wickets at regular intervals. Pakistan got off to a laborious start, scoring their first run only off the 17th delivery of the match. The stand was a solid one though, as Azhar and Ahmed Shehzad put on 59 in 13.5 overs before the latter was bowled for 30 off 43 by debutant left-arm spinner Sachith Pathirana. Mohammad Hafeez was unable to continue from where he left off in the last match, hitting Pathirana straight to Angelo Mathews at covers for 9. READ: Sri Lanka seem headed for prolonged period of slump

Babar Azam was unable to make much of a contribution at No. 4, getting bowled by Milinda Siriwardana for 12. Shoaib Malik came in at 96 for 3, and formed a fruitful stand with Azhar. Malik scored a fine 51 at a run-a-ball, but played all around a straight ball from Mathews having added 83 with Azhar. Mohammad Rizwan then came in at No. 6, and started striking the ball well from the start. However, Azhar was soon dismissed, looking to go big against Tillakaratne Dilshan only to find Siriwardana in the deep. READ: Sri Lanka vs Pakistan 2015: Kusal Perera scores joint second-fastest ODI fifty

Sarfraz Ahmed got a tough call when he was adjudged out LBW off Lasith Malinga for 7. He reviewed the call, but despite the fact that the ball would have barely clipped leg stump, the call stayed with the on-field umpire. Rizwan and Anwar Ali then added a quick 56 as Rizwan completed a fine half-century off 36 balls. Rizwan was finally out LBW off Nuwan Pradeep for a 38-ball 52 in the penultimate over of the innings, but he had done his job. READ: Key ingredients of Pakistan’s winning dish in Sri Lanka

Anwar benefitted from a misunderstanding between the bowler and wicketkeeper when he skied one off Pradeep on 16. The ball swirled in the air with both Pradeep and Dinesh Chandimal going in for the catch. The duo ended up knocking into each other and spilling the catch. Lasith Malinga bowled a frugal last over — which included the wicket of Yasir Shah for 1 — but Pakistan managed to cross the 280-run barrier. Pakistan tour of Sri Lanka 2015: Complete Coverage 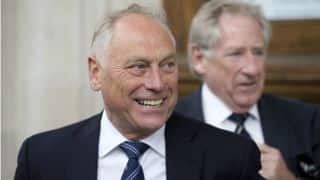