Overs 18: Sam Curran seals the win with a four off Imran Tahir. KXIP overhaul the target, finishing on 173/4 to beat CSK by six wickets in their final IPL 2019 match.

Overs 16.2: OUT! Nicholas Pooran goes for another biggie but gets an outside edge and MS Dhoni does the rest. He struck 36 off 22 with two fours and three sixes. KXIP 164/4

Overs 16: Nicholas Pooran looks in a hurry. Imran Tahir drops short and Pooran latches onto it sending it soaring high over deep-midwicket boundary for a maximum. This was after he attempted to play one to fine leg – the ball did go the distance for four but after hitting his leg. 12 runs from the over. KXIP 163/3

Overs 15: Ravindra Jadeja into the attack now. Nicholas Pooran takes on him straightaway and flays a half-tracker for a six over deep mid-wicket region. His fourth delivery is also short and Pooran pulls it away for a four. 13 runs from the over. KXIP 151/3

Overs 14: An eventful over from Dwayne Bravo – he could have taken a wicket had substitute fielder Murali Vijay held on to a simple catch of Nicholas Pooran at point. Vijay came to field after Kedar Jadhav hurt his shoulder while trying to save an overthrow. Pooran then smashed one through extra cover for a four. 12 runs from the over. KXIP 138/3

Overs 13: Harbhajan Singh ends his quota getting hit for another six – this time from the bat of Nicholas Pooran. A wicket and nine runs from his fourth. His figures today: 4-0-57-3. KXIP 126/3

Overs 12.2: OUT! Harbhajan strikes for the third time. Mayank Agarwal goes for the big shot but finds Ravindra Jadeja in the deep to be caught for 7. KXIP 118/3

Overs 12: Imran Tahir returns after an expensive first over. Just four off his second over. KXIP 117/2

Overs 10.4: OUT! Two in two for Harbhajan Singh as he removes Chris Gayle. A half-tracker from Bhajji and Gayle muscles it towards long-on but finds Dhruv Shorey to be caught for 28 off 28. He struck two fours and as many sixes. KXIP 108/2

Overs 10.3: OUT! KL Rahul holes out as Harbhajan Singh strikes. The opener was looking to hit this over covers but finds Imran Tahir to hole out on 36-ball 71. He struck seven fours and five sixes. KXIP 108/1

Harbhajan Singh is back

Overs 10: Dwayne Bravo isn’t conceding fours but continues to be erratic. Two wides in his third over. Six runs from it. KXIP 106/0

Overs 9: KL Rahul takes a couple of steps forward and pulls one from Deepak Chahar through mid-wicket for a four. He then drills one through long-off to bring up the 100 for KXIP.

Deepak Chahar is back

Overs 7: Imran Tahir introduced into the attack. He does well before bowling a full toss which Chris Gayle puts way for a four. He then hammers two consecutive sixes off him as KXIP continue their blazing start. 17 runs from it. KXIP 85/0

Overs 6: An erratic first over from the allrounder – four legbyes and two consecutive wides. 8 runs from it. KXIP 68/0

Dwayne Bravo introduced to bowl the final over of Powerplay

Overs 5: Some relief for CSK as Rahul Chahar’s third over results in just three singles. KXIP 60/3

Overs 4: Stunning! Where was this KL Rahul all season? He has taken Harbhajan Singh apart with three fours and two sixes in an over. He started the over with three consecutive fours and then went one better with a six. He attempted a sweep off the fifth delivery off which he managed just a glove. But he finished the over with a six over to blast the quickest half-century of the season – off 19 deliveries. 24 runs from the over.

Overs 3: KL Rahul continues to get fours and this time he crashes two fours in three deliveries of Rahul Chahar. 9 runs from it. KXIP 33/0

Over 2: An expensive first over from Harbhajan Singh. Chris Gayle greets him with a four to long leg boundary. KL Rahul then belts consecutive sixes off his fourth and fifth delivery. 18 runs from the over. KXIP 24/0

Over 1: KL Rahul breaks the shackles with a six off the final delivery after watchful five deliveries. KXIP 6/0

Overs 20: So Chennai Super Kings finish on 170/5. Excellent last over from Mohammed Shami – just five runs and two wickets in it.

Overs 19.4: OUT! Another one goes down and this time it’s Kedar Jadhav who makes room but Mohammed Shami fires it straight to have him cleaned up for a first-ball duck. CSK 167/5

Overs 19.2: OUT! Ambati Rayudu takes the aerial route gets the elevation, not the distance as he finds Mandeep Singh at deep mid-wicket. He scored 1. CSK 166/3

Overs 18.4: OUT! Oh well Faf du Plessis misses out on a hundred by just four runs! Having smoked Sam Curran for a six off the previous delivery, he’s bowled off the next. Curran with a fiery response to get his third wicket. He scored 96 off 55 with 10 fours and four sixes. CSK 163/3

Overs 17: End of a successful over from Sam Curran which began in ominous fashion when Faf du Plessis smashed the young seamer for a six before he removed Raina. 8 runs from the over. MS Dhoni is the new man in. Faf batting on 88 off 51. CSK 150/2

Overs 16.4: OUT! Suresh Raina caught at short fine leg by Mohammed Shami. Sam Curran has broken the century stand with the scalp of Raina on 53. He struck five fours and two sixes during his stay. CSK 150/2

Overs 16: Faf du Plessis has taken Andrew Tye to the cleaners. He crashed the first delivery through extra cover for a four and then pulled the following delivery for back-to-back boundaries. The carnage continued as he struck the third one over long-on for a maximum. 18 runs from the over. CSK 142/1

Overs 15: That’s a expensive over from Murugan Ashwin. Raina started it with a four through midwicket region. Faf du Plessis then crashed one straight past the bowler for a four and did one better by clubbing a six off the following delivery. 18 runs from the over. CSK 124/1

Overs 14.2: FIFTY for Suresh Raina – Mr Consistent gets to his half-century with a four off Murugan Ashwin.

Overs 12.1: With a single, Faf du Plessis reaches his half-century off 37 deliveries

Overs 12: CSK are getting a boundary every over now. Poor from Andre Tye as he bowls one on the leg allowing Suresh Raina to guide to the fine leg region for his fourth four. 7 runs from it. CSK 97/1

Overs 11: Now Faf du Plessis charges forward and lifts one from Murugan Ashwin over his head for a four. And then gets another boundary, lucky though, thanks to some sloppy fielding from KL Rahul near the four as he allows the ball to go through. His captain R Ashwin looks quite angry at the effort. 11 runs from the over. CSK 90/1

Murugan Ashwin into the attack now

Overs 10: A productive over for CSK. A boundary each to Suresh Raina and Faf du Plessis in it. 12 runs from the over. CSK 79/1

Overs 9: Suresh Raina looks in the mood today. He gives Brar the charge and sends one flying high over deep mid-wicket region for his second six. 10 runs from the over. CSK 67/1

Overs 8: Ashwin continues. Raina waits and waits and cleverly guides the first delivery past Chris Gayle at first slip for another four. 8 runs from it. CSK 57/1

Overs 7: Suresh Raina dances down the track and lifts the fourth delivery over the long-on boundary for the first maximum of the innings. 7 runs from the over. CSK 49/1

Harpreet Brar is back

Overs 6: Ashwin drops one short and Suresh Raina pulls it away for a four. Six runs from the over. CSK 42/1

Ravichandran Ashwin into the attack now

Overs 5: A good over from Sam Curran in which KXIP got their first breakthrough. Faf du Plessis looks in excellent touch today as he skips forward and sends one past the bowler for his fourth boundary. Six runs from the over. CSK 36/1

Overs 4.1: OUT! Shane Watson has been cleaned up by Sam Curran as CSK lose their first wicket. Not the length but Watson still wanted to steer it to third man and missed it to be bowled for 7. CSK 30/1

Overs 4: Mohammed Shami continues. Does well to limit the CSK duo to just two singles off his first five deliveries. However, he errs and offers a low full toss to Shane Watson and he dispatches it to the mid-wicket region for his first boundary. 6 runs from the over. CSK 29/0

Overs 3: Faf du Plessis offers Sam Curran the same greeting as he gave to Shami in the previous over – a four off the very first delivery. A gentle push past Curran for his second boundary. Five more runs off his next five deliveries make it 9 runs from the over. CSK 23/0

Overs 2: Faf du Plessis welcomes Shami with a four through square leg region. Three more singles make it 7 from the over. CSK 14/0

Pace in Mohammed Shami from the other end

Over 1: A good start from Harpreet Brar as he allows three runs off his first five delivery. He then strays, bowls outside off allowing Shane Watson to send it rolling past covers for the first four of the innings. CSK 7/0

KXIP have made one change to their playing XI – Harpreet brar replaces Arshdeep Singh. CSK are unchanged

After six weeks of pulsating action, we reach the penultimate game of IPL 2019 s league phase, but turns out, it s probably the most inconsequential match of the tournament. Chennai Super Kings, who sit comfortably atop the table, will host the already-eliminated Kings XI Punjab. There isn t much to gain or lose for either team, except some fine tuning. That too, is relevant just for CSK, who would expect some solid competition from KXIP, looking to sign off from the IPL on a high.

Already assured of a Playoff berth, the only incentive for CSK here would be to retain the pole position. A heavy loss to Mumbai Indians saw their net run-rate dip considerably and with just one game left in the league stage, the defending champions need a win to cement their position at the top. Currently on 18 points, a win will give them 20 points, unlikely to be achieved by any other team. Click here to read more 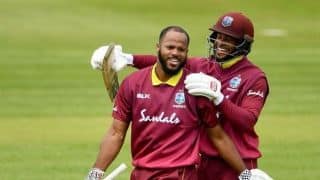