After Chris Lynn provided Kolkata Knight Riders with the perfect start in chase of 184 to win against Kings XI Punjab in Match 52 of IPL 2019 at the IS Bindra PCA Stadium, Mohali on Friday, young Shubman Gill took over with his second straight fifty taking KKR to 157/3 in 16 overs, when the second strategic time-out was taken.

After Chris Lynn provided Kolkata Knight Riders with the perfect start in chase of 184 to win against Kings XI Punjab in Match 52 of IPL 2019 at the IS Bindra PCA Stadium, Mohali on Friday, young Shubman Gill took over with his second straight fifty taking KKR to 157/3 in 16 overs, when the second strategic time-out was taken.

After Lynn departure in the sixth over. Robin Uthappa got going with some sublime shots to the boundary ropes and with Gill put on 38 runs for the second wicket to keep KKR on track. Uthappa made 22 off 14 balls with the help of two fours and six before he fell to Ravichandran Ashwin in the 11th over.

Gill, at the other end, got to his third IPL 2019 fifty off 36 balls. Andre Russell was bumped up the order, but the big Jamaican failed to get going, despite getting a reprieve, when Mayank Agarwal dropped him at long-off. Russell was caught at deep square, tying to muscle a Mohammad Shami short-pitch delivery to depart for 24 off 14 balls, and that opened up the game. Gill is batting on 58 off 45 balls, while Dinesh Karthik is on one off one and KKR need 27 to win in 24 balls.

Chirs Lynn blazed his way to 46 off just 22 balls with the help of five fours and three sixes to help KKR to 62/1 in the first six over against KXIP.

KKR, chasing 184 to win, and keep their playoff chances alive, were off to a slow start with Mohammad Shmai sending down a tidy three-run over. Young Arshdeep Singh conceded just three runs off his first four deliveries before Lynn got going with a massive six off a short ball.

Shubman Gill got a four in Shami’s next over with a total of seven runs coming off it. Arshdeep though was taken for plenty in his next over with Lynn finding thr boundaries ropes three times in a row as 15 runs came off it. Ravichandran Ashwin insterted himself in to powerplay overs and Lynn took a four and a six as 12 runs came of it.

Andrew Tye was taken for two fours and six by Lynn, but Tye had the last laugh, bumping out Lynn and taking a return catch.

Earlier, Sam Curran provided a much needed final flourish for Kings XI Punjab with an quickfire 55 off 24 balls, to help KXIP to 183/6.

After Nicolas Pooran and Mayank Agarwal had revived KXIP’s innings that stuttered early on with the quick wickets of KL Rahul and Chirs Gayle, the lower-order of KXIP put in handy contributions, as 68 runs were scored in the last six overs, with 32 runs coming in the final two overs bowled by Andre Russell and Harry Gurney. Gurney’s last over was taken for 22 runs with the sequence being 2,2,2,4,6,4. Curran was dropped on 17 by Rinku Singh. 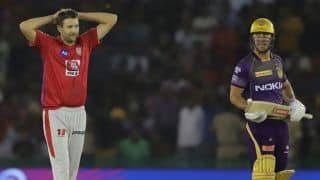 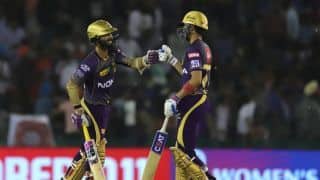