KXIP vs SRH IPL 2015: David Warner delighted to get balance of the team right

KXIP vs SRH IPL 2015: David Warner delighted to get balance of the team right

David Warner scored a half-century to guide SRH to 150.

Mohali: An elated Sunrisers Hyderabad (SRH) skipper David Warner on Monday expressed happiness at his side getting the balance right in their victorious outing against Kings XI Punjab (KXIP) in an Indian Premier League (IPL) 2015 match at the Punjab Cricket Association Stadium, Mohali. KXIP vs SRH IPL 2015: Trent Boult feels happy to be rewarded for his efforts

Warner said it is difficult to choose from the pace weaponry he has at his disposal, especially with South African Dale Steyn and New Zealand’s Trent Boult in the dug-out. “It’s challenging to pick one out of Steyn and Boult, we try to get the balance right which we got right tonight,” Warner said at the post-match presentation ceremony. IPL 2015: George Bailey blames Kings XI Punjab’s dismal batting performance for loss against Sunrisers Hyderabad

Sent into bat, Hyderabad put on 150/6 but then restricted the Kings to 130/9 in their 20 overs, thus pocketing an easy 20-run win. “I thought 160 was par. Mine was a key dismissal and the boys bowled fantastic after that. The bowlers won us the match and today it was a fantastic effort,” he said. KXIP vs SRH, IPL 2015 Match 27 at Mohal: Highlights

Warner too contributed with the bat scoring 58 of 41 deliveries and added he liked the duel between him and his Australian team-mate Mitchell Johnson. “We face [Mitchell] Johnson a lot at home and my thinking was to make room and score runs. I got the better of him today, but he might get me next time,” the skipper concluded. 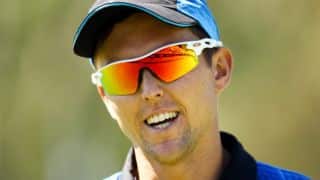 KXIP vs SRH IPL 2015: Trent Boult feels happy to be rewarded for his efforts