Kyle Abbott: KXIP are probably better than the results in IPL 2016

Kyle Abbott: KXIP are probably better than the results in IPL 2016

Kyle Abbott feels that in a marathon tournament like IPL, losing a few matches at the onset does not necessarily mean end of the road for KXIP.

Kolkata;South African speedster Kyle Abbott feels that in a marathon tournament like IPL, losing a few matches at the onset does not necessarily mean end of the road for the 2014 finalists as they have played better than what the league table suggests. Kings XI Punjab (KXIP) are at the bottom of the heap with two wins from seven games but Abbott feels that they are slowly climbing the upward graph after beating league toppers Gujarat Lions in their last game. “We are probably better than the results we have to show at the moment. It is important to get off to a good start and unfortunately we did not. It is also a tournament that allows you to almost have that kind of a start [losing a few games],” said Abbott. Hashim Amla to replace Shaun Marsh for Kings XI Punjab in IPL 2016

He then cited defending champions Mumbai Indians’ example of how their fledgling campaign was brought back on track IN 2015. “Last year Mumbai Indians didn’t start off well but took off later and this year they have done it again. They didn’t start well but at the moment they are sitting comfortably at the top of the table [second place]. Although it is important to get momentum and get off to a good start though the tournament allows you a bit of grace to find your rhythm later on. We still have seven games left and all to play for to get into those playoffs position,” Abbott said on the eve of their match against KKR. Kolkata Knight Riders vs Kings XI Punjab, IPL 2016 Match 32 at Eden Gardens, Preview

The team looked regrouped under new captain Murali Vijay, who took over from David Miller to relieve the South African from extra responsibilities. “It has been a smooth transition. Vijay is a senior player and even when Miller was the captain, he always had something to say as a senior player should. He always got involved. It has carried on normally. It is just a different voice now. Vijay has always been there and never sat in the background. He always put in his opinion and I think he is going to do well in the next couple of games and the guys are behind him. We are looking forward to it,” he said.

Still their batting looks unsettled with Miller and Glenn Maxwell yet to fire but Abbott backed the hardhitting duo and it’s just a matter of time. “They both know that they haven’t been in the greatest of forms. It hasn’t come through because of a lack of practice, it is just unfortunate that they have fallen into a form like this in a crucial part of the tournament. I am sure they are going to come alright and we have seen glimpses of it. Miller has batted nicely and he has shown glimpses of it here and there. Maxwell has got that fifty obviously finishing a game for us at home. I think they will come right and hopefully the second half will see some better results from them.”

Against Gujarat Lions they were bundled out for a modest 154 in 19.5 overs but it was left-arm spinner Axar Patel, who claimed the season’s first hat-trick en route to his match-winning 4/21 to turn the match around. “A lot of people did not realise that it was a hattrick. It took a while to get there – four overs apart. It was excellent bowling from Axar. He put us into a great winning position. We have been waiting for a bowling performance like that. We have not been up to the mark in the first couple of games and it has taken a bit longer to get into a rhythm and get the combinations right. Hopefully, we will take this form forward in the second half of the competition.”

With the IPL being the story of the chasers so far, Abbott felt that the teams batting first are a bit more conservative. “They setup their innings better in the phase of twenty overs. While chasing it is almost as if they are coming in and have a total in mind and they just want to get there as quickly as possible. You can’t really put a finger on it. Probably you feel batting first you hold up a bit while batting second you seem to let go and chase it down.” 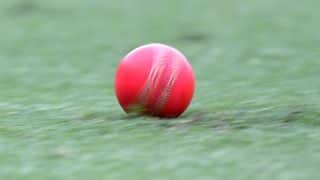 CAB to use 'Pink-Ball' in Inter-Club championship