Wellington: New Zealand pace bowler Kyle Mills announced his retirement from all cricket Wednesday, following Daniel Vettori in calling it quits after the ICC Cricket World Cup 2015 final. Mills was consistently ranked among the world’s top 10 one-day bowlers throughout his illustrious 14-year career, and for a long time was ranked number one.

“It’s been an honour and privilege to play cricket for my country over the past 14 years and I will miss it greatly,” the 36-year-old said. “However the time is right for me to step away from playing this great game and devote more time to my family who have sacrificed so much for me to keep playing the game I love.”

Mills represented New Zealand in 170 ODIs and took 240 wickets to be the Black Caps’ second highest wicket-taker in the shortened game behind Vettori, who took 297. Vettori announced his international retirement on Tuesday when the New Zealand side returned from Melbourne after losing the World Cup final to Australia by seven wickets. READ: Early kill made New Zealand meander

Mills took part in three World Cups, although in the latest edition he was one of three members of the New Zealand squad who did not take the field as the Blacks Caps kept a largely unchanged line up throughout the tournament.

He also played 42 Twenty20s and 19 Tests for his country. “Kyle has been a wonderful ODI player over a long period of time and, but for injury, would have played closer to 200 games for New Zealand,” New Zealand Cricket chief executive David White said.

“However, what I’ll always remember Kyle for most was when he knocked over the England Test team’s top-order during his match-winning spell at Hamilton in 2008, dismissing in quick succession Alastair Cook, Michael Vaughan, Andrew Strauss and Kevin Pietersen.”

Mills finished that innings with his best return of four for 16 from 13 overs. His best ODI figures were five for 25 against South Africa in Durban in 2007. “To have the longevity that Kyle’s had takes an incredible work ethic and desire to represent your country,” coach Mike Hesson said.

“On top of what he’s achieved on the field, he’s also a fantastic bloke and a great team man. He’s a natural leader who did a superb job of captaining the side in Bangladesh and Sri Lanka last year and has brought a lot of passion to the group.” 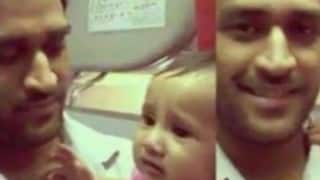 Is this MS Dhoni meeting his daughter Ziva?