A lacklustre Delhi Daredevils will be desperate to change the course of their disastrous campaign when they square up against an equally out-of-sorts Pune Warriors India in Indian Premier League match at Raipur on Sunday. 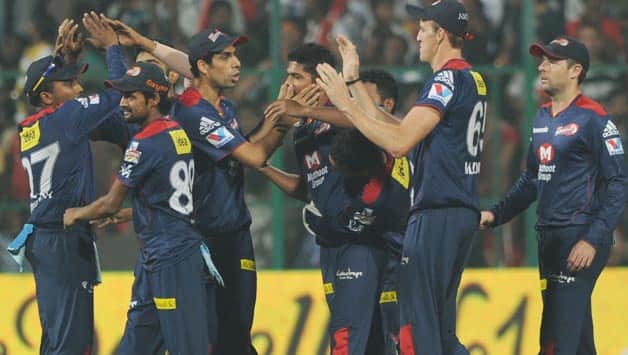 A lacklustre Delhi Daredevils will be desperate to change the course of their disastrous campaign when they square up against an equally out-of-sorts Pune Warriors India in Indian Premier League match at Raipur on Sunday.

The match will also mark debut of a new venue — the ‘International Cricket Stadium’ — in the capital city of Chattisgarh and the successful staging of the two matches in this year’s league could well open the doors for international assignments in near future.

On paper, there is not much to choose between the two sides as they have been equally woeful losing matches on the trot.

While the Daredevils languish at the bottom of the table with seven defeats in eight games, the Warriors have fared no better this time having lost six games out of their eight encounters and are currently placed eighth.

Both teams are seeking redemption and being pitted against each other gives that perfect opportunity to both the sides to get some confidence back which has been battered by repeated failures.

While Daredevils could never recover from the twin-injury shocker of Kevin Pietersen and Jesse Ryder, Warriors have hardly produced an effort where they have done well in all departments.

Initially, Warriors’ batting was a cause of concern. But once that was sorted out, their bowlers started getting hammered.

If David Miller‘s assault wasn’t enough, Chris Gayle‘s 175 not out must have done a lot of psychological damage to their bowling unit.

In fact, the situation gives Daredevils a good opportunity to eke out a second win in the league as they might face a beleaguered side which is yet to recover from the ‘Gayle Storm’ that struck them.

But for that to happen, the Virender Sehwags and the David Warners need to fire in unison, which certainly hasn’t happened with the team this season.

While it was expected that Mahela Jayawardene, Sehwag and Warner will shoulder extra responsibility in KP’s absence, their significant contributions have been few and far in between.

Only five half centuries have been scored by Daredevils batsmen with Jayawardene and Warner scoring a couple and the only match-winning effort was an unbeaten 95 that came off Virender Sehwag’s bat.

With the presence of Sir Viv Richards in an advisory role, the Daredevils will certainly receive some sound advice on batting as well as how to make a comeback.

There is no denying that Daredevils’ are not very strong when it comes to local batting talent.

Maharashtra’s Kedar Jadhav has shown some promise with cameos but he is certainly not good enough to pull off a match singlehandedly.

Unmukt Chand scored two zeros and expectedly didn’t get a look in.

The real disappointment has been Manpreet Juneja who has been given seven matches out of the eight. A 50-ball-100 in the National T20 had raised hopes that the Gujarat batsman would be able to replicate that form in the IPL.

But unfortunately, he has been one among the many in the league who have failed to bridge the gap between scoring against domestic bowlers and doing well against quality international attacks.

More often than not, he has been wasting deliveries as a strike-rate of less than 100 and an average of 17 plus would indicate.

For Pune, getting the right combination of four foreigners has been the key. While Aaron Finch has more than made up giving explosive opening starts, his captaincy has suffered mainly due to the poor form of his bowlers.

Barring Bhuvneshwar Kumar, none of the others have been able to maintain consistency.

The biggest disappointment has been Yuvraj Singh who has scored only 104 runs in five games and one would expect that the explosive batsmen enthralls his fans with big hits which would be an ideal feast for the Sunday crowd in Raipur getting the first taste of a high-profile match.