The early wicket of Lahiru Thirimanne for 4 (21) will give Scotland hope.

Alasdair Evans has got the early wicket of Lahiru Thirimanne for just four runs from 21 balls in the ICC Cricket World Cup 2015 match. Thirimanne never really got going and faced numerous dot balls. Tillakaratne Dilshan at the other end has been quite comfortable against the new ball.

Scotland will be excited with the early breakthrough but with Kumar Sangakkara at the crease now, they’ll be aware that their job is to keep picking wickets as long as the ball offers movement. Catch Live Updates of Sri Lanka vs Scotland ICC Cricket World Cup 2015 match here

Earlier Sri Lanka won the toss and elected to bat first on a juicy track at Hobart. Sri Lanka won’t carry much pressure on their shoulders going into the match as they have already qualified from Pool A alongside New Zealand, Australia and Bangladesh. Scotland are yet to win a single match in the tournament and would hope to get the better of Sri Lanka. 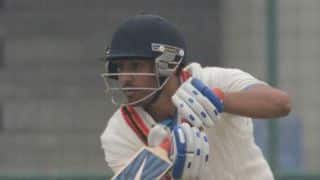