Thirimanne and Dilshan were batting on 21 and 29 respectively at the end of 12 overs.

Lahiru Thirimanne and Tillakaratne Dilshan brought up the fifty-run stand for the opening wicket in the seventh and final One-Day International (ODI) between Sri Lanka and New Zealand at the Westpac Stadium in Wellington on Thursday. Sri Lanka reached a score of 53 for no loss at the end of 12 overs, with Dilshan and skipper Thirimanne batting on scores of 29 and 21 respectively.

Sri Lanka earlier won the toss and elected to bat. New Zealand opted to rest regular captain Brendon McCullum, with Tom Latham occupying his place in the playing eleven and Kane Williamson taking up the role of the skipper. Trent Boult was the other player to be replaced, with Tim Southee coming in his place.

Dushmantha Chameera made his ODI debut after getting picked in the Sri Lanka playing eleven for the final ODI. There were three other changes in the team, as Sri Lanka aimed to salvage some pride after having lost the series already. 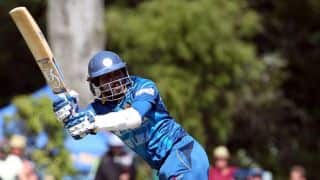 New Zealand vs Sri Lanka, 7th ODI at Wellington:Tillakaratne Dilshan gets his half-century