Balaji and Johnson have picked up the wickets so far.

Chasing Kings XI Punjab’s mammoth total of 193, Sunrisers Hyderabad have made a poor start as they have lost three wickets in the first six overs — Shikhar Dhawan, Aaron Finch and David Warner. Lakshmipathy Balaji took the Australians while Mitchell Johnson dismissed Dhawan. They have managed just 45 for the loss of three wickets after six overs against KXIP. SRH will hope for a good show by the middle-order.

Opening the innings alongside Finch, the SRH captain, Shikhar Dhawan didn’t last long as he fell to Mitchell Johnson in the second over. Dhawan lasted for just three balls, his feet were not moving as he under-edged a widish delivery outside the off-stump to hand an easy catch to Wriddhiman Saha.

Dhawan’s wicket brought Finch’s Australian opening partner, David Warner to the centre. Warner too took his time early on in the innings, and that allowed the Punjab bowlers to build some more pressure as the asking rate started to rise.

Hyderabad were then dealt another blow as Finch lost his wicket to Lakshmipathy Balaji in the fifth over. Balaji castled him. In the same over, Balaji dismissed Warner as well as the Australian handed an easy catch to the point fielder.

SRH have lost their most formidable batsmen, and will hope the middle-order can get some healthy runs. 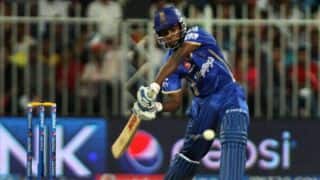 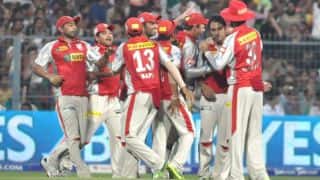