Lalit Modi was banned by BCCI a year ago.

In six years Lalit Modi rose to such heights in Indian cricket in the new millennium that no one thought his fall would be as meteoric. When he was thrown out of the Indian board, many had a sneaky suspicion that his tenaciousness was enough to come back and haunt those who hounded him out.

Modi, a former vice-president of the Board of Control for Cricket in India (BCCI), was banned by the same board a year ago finding him guilty on eight counts of indiscipline and misconduct by its disciplinary committee after suspending him soon after the 2010 IPL final.

A year later, the regional passport office in Mumbai had revoked his passport, making it difficult for his return home, though he still says that his return home is linked to the security threat to him and his family from the underworld.

Modi, former commissioner of the Indian Premier League (IPL), prepared ground for his return sooner than later by successfully getting elected as president of the Rajasthan Cricket Association soon after his friend Vasundhara Raje Scindia regained power as Rajasthan chief minister.

As mentioned in this column before the general election, his fate was clearly linked to the electoral prospects of his namesake Prime Minister.

Even before the Modi government’s hundred days in office, Lalit has been handed his passport back by a division bench of the Delhi High Court.

A remarkable coincidence, both at the Centre and in states he has his friends in power even if one highly influential minister is not a great admirer of the scion of Modi’s business empire and who was part of the disciplinary committee that banned him for life.

Still, there is little doubt that the dark clouds over Modi’s head are clearing fast.

Modi’s second innings as RCA chief and the return of his passport came at an inopportune moment for the BCCI and its court-suspended president N Srinivasan, who himself is struggling to extricate himself out of maze of administrative charges and familial problems.

The BCCI had no choice but to act quickly to stop Modi from barging into the Annual General Meeting (AGM) next month and suspended the RCA.

A fortnight ago the board set up a five-member ad-hoc committee to oversee the running of cricket in Rajasthan and also Bihar where one of the faction leaders is relentlessly fighting BCCI and Srinivasan.

Not surprisingly, the RCA challenged the board’s action of asking former India player and secretary of the Karnataka State Cricket Association Brijesh Patel to head a panel to oversee the state cricket.

A beaming Modi was all over TV studios linked to his base in London after the court decision to return his passport.

He was quick to tell TV interviewers that he is happy that he stands vindicated and also that he is clearly not interested in either becoming the president of the BCCI or in taking over again the reins of the IPL.

He should have, perhaps, qualified his statement about becoming board chief adding “not now.”

At the same time he rants that there are some rotten apple (read Srinivasan and his cohorts) in the board and they will have to go and that both BCCI and ICC are on his radar.

He thunders that cricket at all levels from Twenty20 domestic leagues world over, first-class cricket and Future Tests Programme (FTP) need overhaul for the betterment of the game.

It is clear he has an ambitious plan. Call it his confidence or arrogance he leaves no one in doubt that he is back for a long haul and in Muhammad Ali style he has announced that he is a “master strategist”, telling his opponents to watch out for him.

Modi’s good tidings has another coincidence, his self-confessed Guru Inderjit Singh Bindra has decided to withdraw from all cricket affairs, quitting first as president of the Punjab Cricket Association.

It was Bindra who brought him into the board and stood by him in his worst times when all others in the board decided to get even with him. 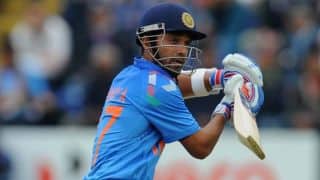