Lance Klusener feels reshaping the bat sizes might be helpful.

From September 28th, new ICC rules and regulations came into existence. Several changes were brought in DRS, bat sizes and many more. David Warner, Matthew Hayden, Chris Gayle, Sachin Tendulkar are few who made use of heavy bats. Lance Klusener, who is known to be an aggressive South African batsman, made use of heavy bats. Interestingly, Warner has already started using his earlier sized bat. It was with the same one where he got a century on his 100th ODI. He began the usage of regular bats since the Bangladesh series. However, Klusener feels reducing bat sizes might provide desired results. However, reshaping it might do the trick.

Speaking exclusively to pakobserver.net, Klusener said, “Big 6s come out the middle of the bat so reducing the size of the bat edges to me make no difference. Bat makers may need to reshape or rebalance bats. T20 cricket has forced all batsman to learn the technique if 6 hitting and forced batters to swing harder. Improved fitness or strength levels of players in general also help in hitting many more boundaries than we have seen in the past. Sweet-spot is In the middle at the highest point of the ridge of the bat. The better the wood the bigger the sweet spot.”

On bat sizes, ICC had also mentioned, “There are no changes to the permitted width and length of a cricket bat, but the thickness of the edge can be no more than 40mm, and the thickness of the bat must not exceed 67mm at any point. Umpires will have a gauge to check that bats meet the new regulations.” 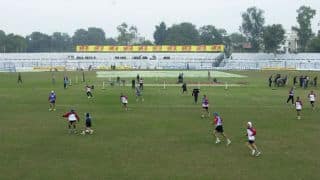