Lasith Malinga had a bone bruise on his left knee that troubled him for a long time, eventually forcing him to relinquish Sri Lanka s captaincy during the WT20 2016 tournament.

Sri Lanka s premier fast bowler and T20 World Cup winning skipper Lasith Malinga is likely to return into international cricket, after a long layoff due to injury. Malinga could feature for Sri Lanka in the upcoming three-T20I series against South Africa later this month. Malinga had a bone bruise on his left knee that troubled him for a long time, eventually forcing him to relinquish Sri Lanka s captaincy during the WT20 2016 tournament. Malinga also missed out on series against England and Australia. Malinga found him in a similar position in 2009 where injury forced him to stay away from playing cricket for a year. His prolonged injury issues meant Malinga quit playing Test cricket at the age of 27.

Malinga s last international match was during the Asia Cup T20 2016, when Sri Lanka took on the United Arab Emirates (UAE). Malinga ended up picking 4 wickets but since then he has been sitting out and rehabilitating. Sri Lanka has struggled with their death bowling in the T20Is as seen in the series against England and Australia where they were cantered all over the park. With Dhammika Prasad also out with an injury Sri Lanka s bowling line in Malinga s absence has looked paper-thin.

It will be also a good chance for new comers like Dushmantha Chameera, Dasun Shanaka and Nuwan Pradeep to share some quality time with Malinga in the dressing room.

Sri Lanka are currently 0-2 down against South Africa in the three-Test series with third and final Test to be played starting January 12. The teams will then move into the limited-overs leg of the tour, which consists of 5 One-Day International and 3 T20Is. 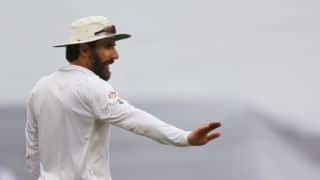