Lendl Simmons and Ambati Rayudu scored 68 runs each in the run-chase.

Lendl Simmons and Ambati Rayudu‘s sparkling 130-run partnership helped Mumbai Indians power to a seven-wicket victory in their Indian Premier League (IPL) 2014 match against Sunrisers Hyderabad at the Rajiv Gandhi International Stadium. With this win, Mumbai go above the Royal Challengers Bangalore in the IPL 2014 Points Table and moved into sixth place.

It was easily Mumbai’s most comprehensive victory of the season. A total of 157 looked competitive, but Simmons and Ambati were batting on a different plane. The first few overs were tough during the run-chase as Simmons struggled to get going and CM Gautam was dismissed early.

Rayudu and Simmons came together in the second over with only two on the board. They had tough times early on, but when Irfan Pathan came on in the fifth over, Simmons smashed him for two sixes and a four. That shifted the momentum in favour of Mumbai and both looked in great touch thereafter. That partnership saw some great strokeplay and the best bowling attack in the league was left shell-shocked.

Simmons was doing very well, particularly against the spinners and he got to his half-century in 39 balls. He played very well through the leg-side and some of the sixes he hit were absolutely magnificent. At the same time, Rayudu also got going with a few big hits and raced to his fifty in 34 balls. The 130-run partnership ended in the 16th over when Simmons was bowled by Bhuvneshwar Kujmar when he tried to walk across the stumps. Rayudu was also dismissed for 68 by Moises Henriques when he hit one back to him with Mumbai in touching distance of victory. Rohit Sharma and Kieron Pollard then finished the last rites as the chase was completed with eight balls to spare.

This came after Hyderabad had won the toss and elected to bat in their first home game of the season. Hyderabad were led by Aaron Finch’s 68 as he held the innings together when they lost Shikhar Dhawan and KL Rahul in the first ten overs. It was then that David Warner joined Finch and helped Hyderabad climb to a good score.

Finch’s 68 had its big hits, but was largely sedate as he faced a total of 62 balls. And, Mumbai did bowl well in the middle overs and spilling into the death overs. Harbhajan Singh conceded only 27 runs in his four overs and Jasprit Bumrah gave away only 24. Lasith Malinga was also doing well as he took two wickets, but was taken apart for a few runs towards the end as the last two overs of the innings went for 33. Warner got to his fifty and took Hyderabad to 157. 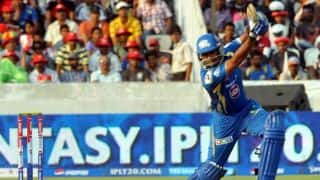