Mumbai have reached a score of 62 for no loss against Punjab after six overs in the IPL 2014.

Mumbai Indians (MI) have reached a score of 62 for no loss against Kings XI Punjab (KXIP) after six overs in the Indian Premier League (IPL) 2014. Lendl Simmons is batting on 50 and Michael Hussey is on five. Mumbai are chasing a 157-run target. This is Match 48 of IPL 7. Mumbai captain Rohit Sharma won the toss and elected to field.

Hendricks’s second over proved to be eventful. He was given an official warning by the umpire for running on the wicket. Simmons then lifted one over cover for a four. Hendricks seemed affected by it and then bowled a wayward bouncer far too wide on the off side. Simmons then tore into Hendricks with two fours. The second was a crunching pull over square-leg.

Simmons continued his charge against left-arm spinner Akshar Patel. He cut a wide delivery through point for a four. Simmons then cleared his front leg and hammered one down the ground for another four. That brought Mumbai their 50 in the fifth over. Simmons then seemed in agony while running two runs. It seemed as if he had twisted his ankle. That didn’t stop him from flicking one over backward square-leg for a four. He then got to his half-century with a push towards mid-off. 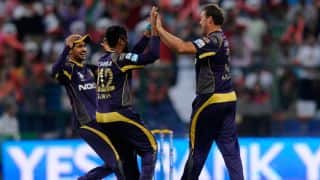