Mumbai are 65 for no loss after six overs in IPL 7.

Mumbai Indians got off to a fine start in their Indian Premier League (IPL) 7 game against Delhi Daredevils. Michael Hussey, after the completion of three overs showed his class by playing  a short arm pull off Jaydev Unadkat for a boundary. Mumbai amassed 12 runs during the fourth over of the game. He had already collected three boundaries during the first three overs of the game. Hussey also used his feet to Shabhaz Nadeem to smash a six. Lendl Simmons, their star performer in the last game was a bit more circumspect. The 50-run partnership between the two came in the fifth over of the game.

Earlier,  Wayne Parnell opened the bowling for Delhi. He straightaway looked to bowl full and found a wee bit of swing. Simmons who has been in prime form for Mumbai Indians opened the batting with Hussey. Hussey was the opened who opened his shoulders by essaying a fine shot through the covers for a boundary. 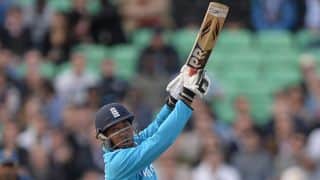