Lendl Simmons‘s magnificent century (100 not out) proved too good for Kings XI Punjab (KXIP) as Mumbai Indians (MI) ran out with a comfortable victory in the Indian Premier League (IPL) 2014 on May 21. Simmons trailblazing knock off 61 deliveries helped Mumbai chase down a moderate 157-run target at Mohali. The win also keeps their faint chances of qualifying for the IPL 7 play-offs. Simmons struck an incredible 14 fours and two six.

Beuran Hendricks bowled the second over. He angled one down the leg side and the ball raced away for five wides. Sandeep then bowled one short and wide and Simmons sliced the ball towards third-man for his fourth four. Simmons then top-edged a short delivery behind for two runs.

Hendricks’s second over proved to be eventful. He was given an official warning by the umpire for running on the wicket. Simmons then lifted one over cover for a four. Hendricks seemed affected by it and then bowled a wayward bouncer far too wide on the off side. Simmons then tore into Hendricks with two fours. The second was a crunching pull over square-leg.

Simmons continued his charge against left-arm spinner Akshar Patel. He cut a wide delivery through point for a four. Simmons then cleared his front leg and hammered one down the ground for another four. That brought Mumbai their 50 in the fifth over. Simmons then seemed in agony while running two runs. It seemed as if he had twisted his ankle. That didn’t stop him from flicking one over backward square-leg for a four. He then got to his half-century with a push towards mid-off.

Simmons then threw his bat at a full delivery and edged it past short third-man for a four. Akshar then got the much-wanted breakthrough as his skidder breached Hussey’s defence and hit the stumps. Hussey was bowled for six runs off 13 deliveries.  That brought an end to the 68-run opening stand. Simmons, though, cut a short delivery from off-spinner Shivam Sharma behind backward-point for a four.

Akshar bowled one on a good length and Simmons bent down and smacked one over the bowler for a four. Simmons then stepped down the track to Shivam Sharma and struck his first six over wide long-on. Mumbai got to their 100 in the 11th over. Simmons then cut a length delivery outside off-stump from Rishi Dhawan through backward-point for a four.

Dhawan, though, got the breakthrough as Ambati Rayudu drove one straight to Virender Sehwag at short extra-cover. He was out for 17 off 14 deliveries. Simmons then stunned the Mohali crowd as he danced down the track to Sandeep and smashed a six down the ground. Rohit Sharma joined in on the act with a pull in front of deep square-leg for a four.

Rohit then cut a wide delivery from Dhawan past point for another four. Hendricks bowled a short delivery from round the wicket and Rohit guided it towards third-man. Sandeep took the catch in the deep. Rohit was out for 18 off 20 deliveries. But no one could deny Simmons his century as he took a single in the 19th over. Kieron Pollard then hammered the last delivery in the 19th over over long-on for a six and won the match for Mumbai. They won by seven wickets. 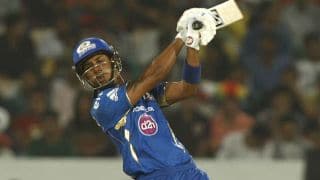 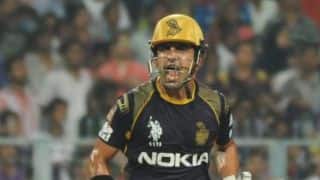