When he was plying his trade at the BPL, playing Test cricket for England never even crossed his mind, revealed Liam Dawson, during 5th test vs India at Mumbai.

Chennai: He might have scored an impressive half-century on debut but a month ago when he was plying his trade at the Bangladesh Premier League (BPL), playing Test cricket for England never even crossed his mind, revealed Liam Dawson who led a lower-order resistance with an unbeaten 66 on Saturday. England made India work overtime with the unlikely duo of Adil Rashid and Dawson leading a lower-order resistance to power the visitors to 477 in the fifth and final Test. “Went I went to Bangladesh for the BPL, Test cricket didn’t even cross my mind. So to be here now and making my Test debut in India is obviously very special,” said Dawson at the post match press conference.

Dawson said it felt nice to achieve a small milestone. “It is obviously nice to do well on debut. It was interesting first few balls in Test cricket for me but I was pleased to get through them. It was my Test debut, I was always going to be up for it. You make one Test debut. I was extremely excited and from a team point of view as well we want to finish on a high. We are in a fairly good position.”

“It’s obviously nice to get small milestones. It’s obviously a small milestone. From a personal point of view it’s a very special day. I am obviously looking for tomorrow. He [Cook] basically told me to enjoy the occasion.” The 26-year-old insisted that it was going to be hard work for England on Sunday. “It’s a pretty good wicket. There isn’t huge amount of spin, hasn’t been much pace in it for the seamers, so tomorrow is going to be hard work for us but if we keep going all day and keep trying to take wickets then we can take wickets.”

On short balls, Dawson said: “It was a good bouncer, I tried to watch it as hard as I could but that’s part of the game sometimes you get it a little bit wrong. As a said I was pleased to get through. I think you got to take one ball at a time and that’s what I was thinking. I put that ball at the back of my mind and I just managed to concentrate on ball at a hat was crucial. I haven’t really thought too much to be fair. I have prepared, I have done what I do for Hampshire and that’s all I can do.”

Dawson said he would just look to continue to do a good job with both bat and ball. “You just got to score more runs and take more wickets it’s as simple as it can be. If I could do that then I can be selected in future squads,” he concluded. 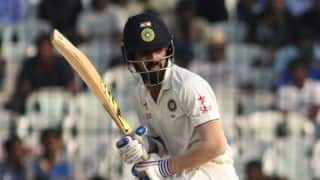 India vs England, 5th Test, Day 3 Preview and Predictions: Hosts look to produce another strong show with the bat 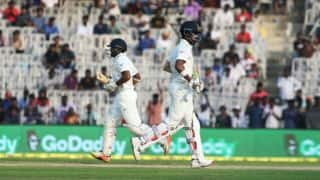