The Yorkshire quick took his maiden five-wicket ODI haul as England completed a 124-run win over West Indies at Bristol on Sunday to go 2-0 up in a five-match series.

England fast bowler Liam Plunkett is happy enough with his position as a One-Day International (ODI) “bad guy” despite suggestions he could be an outside pick for The Ashes squad set to tour Australia. The Yorkshire quick took his maiden five-wicket ODI haul as England completed a 124-run win over West Indies at Bristol on Sunday to go 2-0 up in a five-match series. Amid all the blazing hitting, which saw England hundred hero Moeen Ali hit eight sixes in his 102 and West Indies opener Chris Gayle six in his dashing 94, Plunkett still find a way to take five for 52. ODI cricket may be set up to put the emphasis on big-hitting enjoyed by so many spectators at limited-overs matches, but Plunkett has no qualms about being cast as the fans ‘pantomime villain’ if he succeeds in stopping a blizzard of boundaries.

“I love to be the bad guy for the crowd it means I’m not getting hit out of the park,” said Plunkett.”Everyone wants to see sixes and fours … (but) that’s why I do like it, because you feel as though you can run the game in that period, close a team down, squeeze them,” the 32-year-old added.”We can look at footage, because (it) gives you reminders before you go out,” he explained. “But they are just little reminders … because if you don’t bowl well, it’s still your fault. There’s no-one else to blame but yourself.” Plunkett, however, enjoys being in the firing line.

“I do relish it,” he said.”Obviously (Gayle) is a good player and if you miss, he’ll hit it miles. (But) we feel as though, if we can get an early wicket, we can get on top of them. We do back ourselves; we’re a good team. They (West Indies) are a team that likes boundaries and play dot balls. We feel we are a better team because we hit boundaries and run the ones and twos, and we’ve got one up on them as a result of that.”

Plunkett played the last of his 13 Tests three years ago, but there is a view that his extra pace and bounce could prove an asset in Australia where England begin the defence of the Ashes at Brisbane in November especially now fellow seamer Toby Roland-Jones has been ruled out with a back injury. But Plunkett, speaking ahead of Wednesday’s Ashes squad announcement which takes place on the same day as England’s fourth ODI against West Indies at The Oval downplayed his chances of making the trip to Australia.

“Obviously I’d love to be in the Ashes squad … but maybe they (the England selectors) think of me as a white-ball bowler,” he said. “If I got the go-ahead, happy days — but I can’t see it happening.” 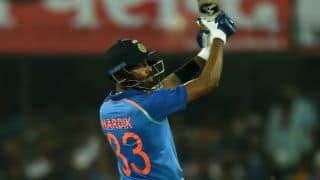