Lisa Sthalekar, the former Australian all-rounder and now a commentator in the eight edition of the Indian Premier League (IPL) 2015, has penned down her experience of being a part of the IPL on her blog. She has been very positive about the basic concept of the tournament. She wrote,”The thing I have enjoyed most is watching players from different cultures, conditions, upbringing and privilege, play against each other and with each other.” 11 little-known facts about Lisa Sthalekar

She added that apart from picking the foreign players, she insisted that it was the process of choosing the right Indian domestic players. She wrote,”Whilst teams busily bid for the stable of available International stars, you shouldn’t underestimate the importance of the teams selecting right domestic Indian players for their IPL squad. This is the extremely crucial to a team’s success, as staff try to complement their International players with the skills of the quality Indian domestic players.” Lisa Sthalekar: Women cricket’s finest all-rounder

She added that team had their preferences and it has worked for them, she added, “In terms of selecting the domestic Indian players, some teams have opted for up and coming young guns who are fearless (Sarfraza Khan and Deepak Hooda), whilst others have chosen experienced cricketers that have been around the traps for over a decade, such as Ashish Nehra and Pravin Tambe. So which approach is better?? It is tough to say as it really depends on the individual, plus I have always believed that you need the mixture of youth and experience to have success. Though I am going to put myself out there on a limb and say the fearless youngster may turn the game in your favour when you least expect it.”

The member of a World Cup winning squad, she was quick to point out about the success of Chennai Super Kings, Looking at each of the IPL teams, it is no surprise that CSK have been the most consistent performer over the history of the IPL due to their batting strength and the number of players who have international experience. And why wouldn’t they be…apart from the genuine International stars on their books, such as McCullum, Faf du Plessis, the two Dwyanes’ – Bravo and Smith, their Indian players have all experienced International success at some stage, most notably being their favourite son, MS Dhoni. However, with Brendan McCullum leaving CSK to play Test cricket in England, the formidable opening partnership between him and Dwayne Smith will be broken and they may be exposed because of this. Having strong openers that dominate in the first six overs are the teams that are posting competitive scores, or showing an ability to chase down the scores with control and dominance.”

She though also added that Royal Challengers Bangalore have turned a corner ever since the arrival of Mitchell Starc. She wrote, “RCB has the flare and the key personnel that can win them a match from any situation, and importantly they appear to be a side that enjoys each others company on and off the field. Off the field they have fun together, whether it be smearing cake over each other because it is someone’s birthday or dancing the night away. On the field, they play with passion and fire and are fiercely competitive. So a well balanced team, with quality depth in the batting and bowling departments, who gets along well is a winning combination for me in IPL8.” Glenn McGrath congruatulates Lisa Sthalekar on glorious career

Her pick to win the tournament though are the Kolkata Knight Riders, she said, “My smokey to win the tournament is Kolkata Knight Riders. Their style of play is extremely different to other teams – they grind and restrict teams with their meticulous use of spin at Eden Gardens. Whilst they do have the hitting power with Andre Russell and Yusuf Pathan, their batsmen are also elegant to watch using timing and their wrists to find the boundary with ease.” 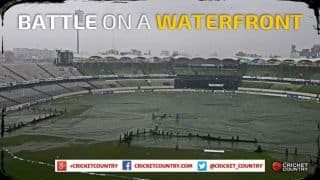