Andhra will be confident of finishing with three points at the end of the final day due to their first-innings lead.

Hello and welcome to the live blog of the fourth and final day of the Ranji Trophy 2015-16 Group B match between Andhra and Gujarat at the Dr. PVG Raju ACA Sports Complex in Vizianagaram on Sunday. With the second round of the group stage matches coming to a close, Andhra are currently staring at the prospect of gaining three points at the end of Day 4, having gained a 113-run lead on the previous day with Gujarat batting on a score of 24 for one at stumps, with PK Panchal and BH Merai batting on scores of 14 and 6 respectively. Andhra had earlier in the day put up a dominating display with the bat as Srikar Bharat slammed a fine century (127) and was well-supported by half-centuries from Mohammad Kaif (76), Murumulla Sriram (63) and Siva Kumar (58).  Rush Kalaria was the only bright spot in Gujarat’s bowling performance, as he finished with figures of 5 for 55 at the end of the innings, with Niraj Patel chipping in with figures of 3 for 39. Read all Ranji Trophy 2015-16 team previews here

So the Gujarat-Andhra match has come to an end. The result was inevitable with little time in hand. Andhra had taken the valuable first innings lead of 113 runs and it was extremely difficult for Gujarat to stage a comeback in the match. An outright win was out of question for Gujarat, who pushed the game towards draw. Andhra would have hoped for a straight win when they started the day, but gritty half-centuries by Panchal, Merai, Bhatt and the skipper Patel secured a draw for Gujarat, and also one point in the process.  Andhra will be happy though with the three points they got.

Gujarat have lost both their set batsmen Panchal and Bhatt in this phase of play. Panchal looked well set for a ton before a Prashanth Kumar delivery got him. He scored a well-complied 72. The other batsman to get out was Bhatt, who got out immediately after reaching his fifty. He was cleaned up by Ayyappa Bandaru for 50. Skipper Parthiv Patel is there in the middle along with Niraj Patel. Both have enormous First-Class experience and will be looking to play the day out. Andhra will be happy with that effort though, as they are already ahead in the game with their first innings lead.

Gujarat have started the post lunch session on a bit aggressive note. They however lost the set batsman in Merai, who was castled by Sumanth for 54. Panchal has been joined by RH Bhatt in the middle, who has looked aggressive from the outset. He is playing on 20 from 27 balls and has scored three boundaries. Panchal continues to be rock steady. Gujarat skipper Parthiv Patel is yet to come.

The duo has managed to keep its wickets intact. Both Panchal and Merai have dominated this phase of play, without giving anything to the bowlers. Merai has got nine boundaries so far, while Panchal has six fours to his credit. With both of the, looking good at the moment, Gujarat is going steady.

Gujarat, who were trailing by 89 at the end of day three, started the day on a positive note. Starting at 24 for 1, the duo of Panchal and Merai has added another 40 runs so far. After the early setback of losing Gohil for one on day three, both Panchal and Merai have played sensibly. They would look to continue in similar fashion. However, Andhra look all set to earn three valuable points on the virtue of first innings lead.

Pick of the tweets: India vs South Africa, 1st ODI at Kanpur 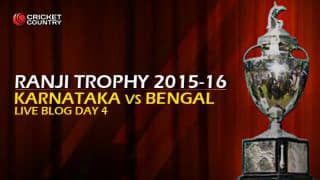